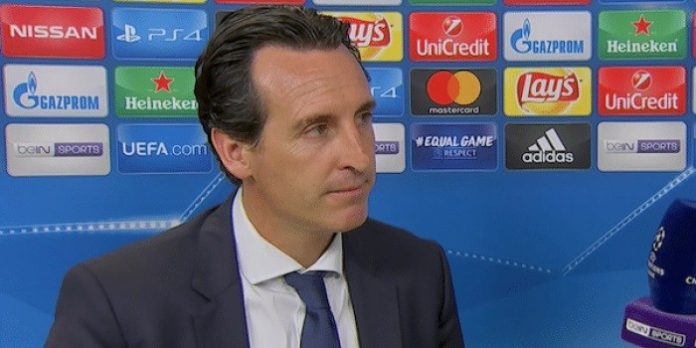 For his first two seasons at Valencia Emery was limited in his purchasing to just Renan and Moya. He was already working with a team that had Silva, Mata, Banega, and David Villa but the fact is clear that he was given an extremely limited transfer budget. Valencia sold off most of their top talent while Emery was there but he still managed three consecutive 3rd place finishes in la Liga. Net spend at Valencia: (£65m profit)

Sevilla sales: Negredo, Navas, and Kondogbia in his first full summer (£58m combined), Moreno and Rakitic in his second season (£37m combined), Carlos Bacca and Aleix Vidal in his final season (£43m).
Sevilla purchases: Bacca and Gamiero turned out to be crucial in his first season at Sevilla.  They got them for a combined £15m and Sevilla sold them later for a combined £54m. He also brought Ever Banega in from Valencia for dirt cheap (£2m) and is notable for purchasing Nzonzi and Krychowiak for a combined £12m and selling Krychowiak to his next club for £27m. Net spend at Sevilla: (£87m profit)

His time at PSG was marred by several big money flops. Guedes, Krychowiak, and Jese have all been loaned out with the latter two relegated from the Premier League with West Brom and Stoke respectively. Net spend at PSG: £200m

When Gazidis heard Emery had dossiers on all the Arsenal players with specifics about how to improve them, his eyes must have lit up with dollar signs. Unai’s record as a coach is one of improving players.

One thing that Arsenal supporters should be happy about is that Emery almost always plays with an outright defensive midfielder and has a history of purchasing DMs. He even took Lass Diarra on a free last season at PSG.

At PSG he was the first Spanish manager to win Ligue Un and achieved career highs of 2.37 ppg and 74% win percentage. His 2.37 points per game and 74% win rate are also the highest ever by a PSG manager.

I included Arsenal’s last season under Arsene Wenger in my chart to illustrate how far off the pace Arsenal were last season.  We earned the same points per game last season as Emery did while he was at Sevilla.

That’s quite a low bar for Arsenal, however, as over the last 21 seasons Arsene Wenger has averaged 1.97 points per game. I’m comparing apples for apples here: the above graphic is Emery’s league points only and Wenger’s 1.97 points per game is Premier League only also.

This just shows the enormity of the task ahead for Emery: he has to perform like PSG but on a budget somewhere between what he spent at PSG and what he earned at Sevilla and Valencia combined. That is to say, he has to basically break even.

Emery’s record in the Europa League is also outstanding and as a result he won the competition three times:

However, when he comes up against top clubs, Emery’s record isn’t so good:

This is all competitions (leagues, cups, and European) and of course he was severely hamstrung at Sevilla and Valencia with those clubs selling off their top players every season. Still, he’s won just 16.5% of his matches against top clubs which is a record he will be keen to overcome.

Emery also has a poor record against top managers:

Most of his losses were incurred while at Sevilla or Valencia and his record is often defended by pointing out the massive gulf in resources available to Emery versus Mourinho, Enrique, and Guardiola.

I also looked at his record against other top clubs during his tenure at PSG. Here I looked at Monaco, Marseille, and Lyon, plus his more testing matches in the Champions League against Arsenal, Barcelona, Bayern, and Real Madrid.

That record is heavily weighted in favor of his home field advantage. At home against big clubs he’s won 10, drawn 3 an lost just 1. He’s also scored 39 and conceded just 7 goals. That’s against the likes of Real Madrid, Bayern, and Arsenal. That’s also a 71% win rate which is quite impressive.

Emery has won 10 trophies in his career: 3 at Sevilla (UEFA CUP) and 7 at PSG, including his only league title.

Arsenal 4-0 Norwich City: By the numbers

Making the emirates a fortress and drawing against the top teams while beating the ‘lesser 14’ should be a decent forst few steps for him and should see us back into the top 4. As long as we’re competing even if we fall short the majority of fans will be happy 🙂

A Different George
Reply to  Ya gooner

Except the Emirates already is a fortress: 47 points last season, same as Man United, but with a better goal difference, and second only to City’s 50.

Ya gooner
Reply to  A Different George

Continuing to make the emirates a fortress* ?

Thanks goodness we can continue the tradition of poor away form and losin to big teams and managers. Wouldn’t want to have toooo much change at once.

Add the “Buying cheap, improving and selling for major profit” narrative to it. Looks like we have got a younger Spanish Wenger after all.

Did he buy Soldado from Tottenham or he sold Soldado to Tottenham ? I think the answer to this question would rest a lot of fears, if he suddenly sold Soldado and the dude forgot how to scores goals under another coach. LOL!

He bought Soldado from Getafe where he scored at about a goal every other game for 9M, maintained that goal scoring rate and sold him to the spuds for 20+ million (the same summer Emery left). After them (7 goals in 52 games) he went to Villarreal and fenerbahce and never recaptured that form. Basically, he was good before and during Emery but shit after Emery.

Fair criticism but, remember, he is a young manager still and not in his “prime” yet. Pochettino is the same age and has a pretty poor record against the top clubs but he’s still considered a promising manager.

Who gives a sh*t about Pochettino? Sp*rs are not the benchmark

I support this motion

Where the hell did our poometer go?

Yes, but can he do it on a cold wet Tuesday at …Huddersfield?

The only thing which worries me has to be his away records.His last season at sevilla, he was not able to win a single game (10 loss,9 draws).

At least he got draws…in 2018 we almost lost every away game. God Bless Huddersfield is all I say!

There is an opportunity for both Emery and Arsenal to step. For starters, this looks very promising.

So that’s two wins against Barcelona and Bayern and the rest are draws, losses, or wins against not-so top clubs.

I had the same opinion too but like Blogs said, we are – at this moment – ONLY a Europa league caliber club.
So until we ‘ascend’ to the next level, we’ll have to make do with someone who had been killing it for this particular competition (atleast for the next season).

Unai ‘The Cannon’ Emery will do for that, yeah?

In addition to what Sánde Class said, there’s also the issue of Ancelotti being a very old school manager, which is fine, but does not suit the new age of progressive club management that we seem to be heading towards

This is a great read, what would be interesting is when he was at Sevilla and Valencia what was the goal difference between those teams when they lost to Barca, RM and Atleti? So we can gauge whether he was competitive, although he lost them.

A good read indeed. Probably more interesting than the one he expected to publish… I was able to acquire a copy…

Mikel Arteta: By The Numbers

Fat finger, on the left of my right hand up….

He will fit right at home at Arsenal..we have a dreadful away record too(last 6 months).

Good to know. I’m too used to Wenger’s football with no DMF and just an all-out attack mode. Hopefully, we’ll see more of the same but with better defensive nous and/or pragmatism?

He is very much the managerial equivalent of our recent player purchases. Solid but not spectacular. Doesn’t have the pedigree of a “top, top” manager but coincidentally doesn’t command the wages of same. Seems like his best quality is that he probably won’t fail spectacularly. In other words, he’s the safest choice that’s within our budget. He doesn’t excite me the way that another manager might have but he’s not a huge gamble either. I’m hoping for better than safe.

Which other manager?
I’m excited at the thought that Dick had thought about the players already. Makes you wonder just what the other contenders did in preparation for their interviews. If they didn’t prepare that, how can they expect to prepare a team to play.

Aubameyang- “Solid but not spectacular”- I don’t think so…

Arsene in his prime was able to pull off sales like that and bring in useful signings. But of course that was when Dein was his rock.

Now we wonder if I.R.S. can do the same for Emery.

so played simeone at atletico madrid 12 times and didnt win a single one. Will fit just right in at Arsenal.

Seems like Coq would have been perfect fit with Emery!

I don’t understand the negative comments on here. The statistics here simply show that Emery is Tier 2 coach, and that’s the best we can do at the moment. The tier 1 managers, and there are very few BTW, are all in clubs that are presently more appealing than ours. The numbers also show that his performance seem proportional to the resources of the club and the quality of players available to him and in this regard I’d say we lie some where in between Seville/Valencia and PSG. I see him getting around 58-60% win rate with the team and… Read more »

I think the curious case of Roberto Soldado should remind everyone of just how good Unai Emery is at improving players. Soldado was so good under Emery, that Tottenham paid 26m euros only for him to give the most underwhelming goals return of his career, at Tottenham.

Arsenal should be smart and not expect a big jump in his 1st season. Manu, manc, pool are not going to sell any important players.. unless spurs sell they are not going to lose 4th.. chelsea spend big always after a bad season.. so at best is 5th if wat we can expect if someone slips up.
Imo.. buy 2/3 players.. give him atleast 6 month to asses wat this squad really lacks if they play emery way.. best way for success this season is one of FA/league cup with latter stages of Europa and go all out to win..

No way! We are going higher than the spuds next year. Without a doubt. Hope- Emery brings me that!

I am excited about Unai and i don’t believe he is a second tier manager /head coach. Does anyone believes that Guardiola would have achieved more with Sevilla or PSG ?