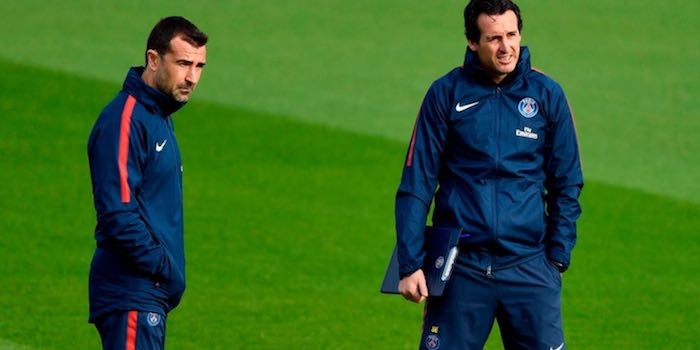 Arsenal have announced the full line-up of coaches who will work with new boss Unai Emery, and Arsene Wenger’s assistant manager Steve Bould has been retained, while former Invincible Jens Lehmann has been let go along with the majority of the former manager’s staff.

Bould will be one of two assistant head coaches, alongside the Spaniard’s long-time coaching assistant, Juan Carlos Carcedo.

Bould was reportedly down under with Darren Burgess recently, an indication that his services would be retained – and having somebody who knows the club as well as he does on Emery’s staff is a sensible move.

So, now we know who the people are behind the scenes, and they’ll be getting down to work in the very near future as pre-season begins in early July.

Emery confirms Arsenal were looking to offer him a new contract

What happened to Shad Forsyth?

The names listed above who are leaving have been removed from the Staff page on the official site. Shad is still there along with Club Doctor Gary O’Driscoll and some other physios and masseurs.

Was about to comment on this.
Pretty certain he’s gone. His role was somewhat odd. Brought in as Head of Performance, but Wenger basically didn’t have it as he kept Tony as his “Fitness Coach”, so he effectively became the floating S&C coach.

But with both Darren on the scene and also a new S&C Coach, can’t see where or how Shad is retained. Shame he didn’t get an announcement.

I also wonder if Bould will get more of a say on defensive duties.

It is odd Shad didn’t get mentioned though.

He’s with the German national team at the moment.

I’m so glad Forsythe is the first one that we’re concerned about. No doubt in my mind injuries and recovery improved after he came into the fold

Surprised, thought it would be the other way around ie Jens stays. Bouldy never seemed to do much under Wenger.

I guess someone needs to put out the cones.

Seems unusual to have 2 ‘assistant coaches’. Presumably it’s a demotion for Bould, as Carcedo will be Emery’s right hand man, but I guess he’ll still be on the bench for games?

But its not unusual, its a fairly common practice nowadays. Guardiola has 3 for example, Klopp has 2, etc.

Fair enough – I guess I am still thinking of maybe the ‘old’ Arsenal way, where the hierarchy would go Manager > Assistant Manager > a group of first team coaches under both of them. This sounds like the assistant will maybe not be as different from other first team coaches. I’m no expert haha.

Never heard of it in the UK, but it’s not uncommon in other countries, a few clubs in Spain, Italy and especially Holland have two assistants

The more the merrier?

Our crazy German quotient is now far too low. Bummer. Love Jens, but, grudgingly, I guess the new man has to pick his own team.

To be fair, i never understood Wenger’s stance on ‘we cannot create artificial positions’ when it had to do with some former players, then Lehman came in as a first team coach which wasn’t very distinct from the other first team coaches

I know this is tough, but it is also much needed. It’s time we start afresh. Hit that restart button and move forward.
Thanx to everyone in the staff who has put in time and effort during all the past years

I agree. Should have happened years ago.

Arsene’s loyalty to his staff, while an obvious human virtue, was a real failing as a football manager. Fresh ideas were needed and people challenged in their positions – instead we got comfortable stagnation.

Too bad for Jens. Never really understood what he was brought in to acheive.

And it makes one wonder, were there people at all that would challenge the Boss? It makes some sense to not undermine a person in charge, but change only ever seemed forthcoming when our backs were really up against it, or if someone (like Pat Rice) retired. Would like to see if Bould can implement his own defensive ideas which maybe he didn’t get to before, assuming that was the case. As for Jens, it could very well have been that there was someone on Emery’s backroom that does what he did in the last year. To be honest, Bould… Read more »

I really struggle to imagine how what you call stagnation was comfortable for anyone.

“Dear #Arsenal Fans , I am sorry to leave the club after only one year again. It was a good experience working with the players as one of the assistant-coaches. But the attitude from our 2004-group is not needed there anymore.”

Jens with a parting shot :0

Greg in Seattle
Reply to  Utkarsh

A bit salty from Jens. Probably better to not burn bridges but hey, it’s Jens.

GraeB
Reply to  Greg in Seattle

Still not forgiven him for that penalty at Spuds when we could have beaten them as well as winning the league.

Lobster
Reply to  Greg in Seattle

Salty no doubt, his feelings are hurt, and Jens doesn’t seem like the kind of guy who suffers in silence

Seems more like the kind who suffers very loudly.

No idea, but he’s been at the club for a year (joined from Reading last July), and the club seems to have liked what they see so far. The other GK coach, Garcia, on the other hand, does come with a very good reputation (some credit Fabianski’s transformation at Swansea to his (and later Tony Roberts’) coaching).

Bit gutted that they couldn’t find a job for jens. Mad as a box of ferrets. But also a winner with a merciless attitude. Just the sort of thinking we needed. Think people are being a bit harsh on bould with statements like “what does he do” Heard a story from ian Wright on his radio show. Wright said bould had tried to take some of the youngsters and a couple of first teamers for extra training to iron out the lapses in concentration and to work on tactical awareness. But Wenger immediately put a stop to it because he… Read more »

Bould should have been shown the door. Sorry but not sorry.
While I feel Jens could have had a positive impact with a new German goalkeeper coming in.

Jens made it clear on a number of occasions that he doesn’t want to be a GK coach.

So if it’s for continuity’s sake, then the clear choice between him and Bould has to be Bould.

I’m interested in Bould. Much like the players, I want to see how he performs without the shackles of Wenger also.

“Head of High Performance” just sounds like such a complete bs job title.

Except for the fact it’s a very common title in Australian, you know? The leading country of Sports Science? Also where Darren’s from? With the likely mandate is that he implements exactly that same structure, attitude and culture at Arsenal?

Just because you’re ignorant to something, doesn’t make it BS.

I don’t speak Australian, so I’ll take your word for it!

No doubt it is a very meaningful role. But I understood Badaab to be making the quite valid point that the actual job title (i.e. what the job is called) consists of meaningless buzzwords. If you ask a person on the Clapham omnibus “what does a ‘Director of High Performance’ do?”, they probably wouldn’t have much of a clue.

Surprised Boulds staying, we’ve seen very little evidence of what he actually brings to the team.
I’d have liked Lehmann to stay but his role was never really defined so it might he he was useless

Wenger kept on saying if he brings in someone, the person has to have a defined role in the club.

Pretty pointed dig from Jens there!

What about Shad Forsythe?

So who’s going to running on with the sponge when a players down injured? We’ve had the ‘Lewin’s’ forever doing that job!

I think I’ve seen Down Under with Darren Burgess, it’s on ITV just after Loose Women

Keeping Bould makes great sense: he’s clearly popular at the club and nobody knows Arsenal better than he does. Steve will be the link between the new management and the players. Hopefully now, unshackled by Arsene “figure it out yourselves” Wenger, Bould will actually be able to coach players to defend properly. And Steve deserves a new contract after having to put up with Wenger’s embarrassing BS for all those years. Wenger not only hurt Arsenal but Bould too.

good, get rid of all the deadwood, don’t know why we hired lehmann anyway, we didn,t need him

I have really liked the management

Finally the quack Boixel is out. perhaps the real doctors can get some work done.

Gazidis is going to get 2 footed by Jens at some swanky corporate football do. You always need Jens.