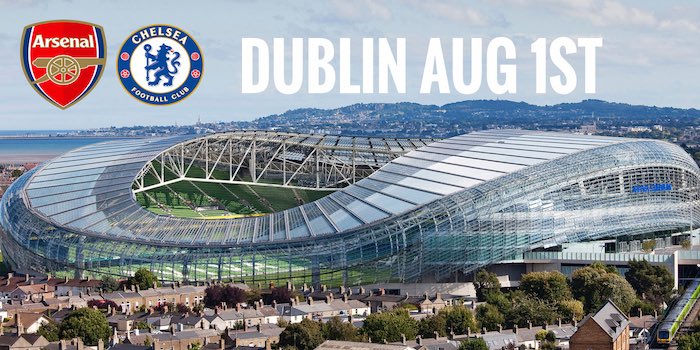 Arsenal will play a pre-season game against Chelsea in Dublin on August 1st, and the match will take place at the Aviva Stadium (Lansdowne Road).

We had been due to face Chelsea in Sweden at the Friends Arena, Stockholm in the International Champions Cup on August 4th but their participation in the Community Shield – having beaten Jose Mourinho’s Man United in the FA Cup final – √has put paid to that.

The Gunners have a long history with Ireland, but haven’t been here for many years, and this game will be a great chance for Irish fans to see the team up close and personal.

Down the years players like Liam Brady, David O’Leary, John Devine and Gilbert O’Silva have helped forged a lifelong connection for Irish Gooners.

Tickets will go on sale on Friday. We’ll have more details on site later, and it’s expected that the club will finalise their pre-season plans this week – hopefully with an update about the Stockholm fixture too.

(Lol jks if you don’t get it straight away)

https://en.wikipedia.org/wiki/I%27ve_Never_Met_a_Nice_South_African if you don’t remember.

Yep, it’s a little known one that, but true. Born in the gent’s toilet in the SuperMacs on O’Connell Street. His mum was pissed off she just missed the cut off for breakfast, didn’t really bond with him, and he managed to find his way to Brazil in time.

Fantastic. Wonder if there will be any members events? When the reserves were over in Dublin in 2010 I was picked to go watch them train at Carton House.
The only player left at the club now is Emi Martinez. He was on trial at that stage.
Looking forward to seeing the team, and not having to catch a plane to do it!!

They must hate the sight of us lately. Which is quite fun. There’s a time I hated playing those blue cunts especially Drogba.

Long may this continue

You mention the strong link we have with Ireland Andrew, we also have a huge following of Scandinavian fans as opposed to players, going back many years.

In my long lifetime The Arsenal has always been an Internationally supported club. More so than some other London clubs we won’t mention on here except on matchdays.

Yes, have met so many fans from that part of the world

Blogs, am I going to hear you cursing on the tv again? haha

You better be there liveblogging this, Arseblog, or I’ll be so angry you’re not that I’ll do nothing but glare just glare really hard for about a day while I read Arseblog content.

Lest we forget Jose Antoni O’Reyes too…

and Nach O’Monreal for that matter

the only sam is nelson
Reply to  Gearoid Miggan

Mez’ O’zil is the greatest.

We need to stop chasing the money playing at these far flung destinations in these show-piece friendlies. The jet lag is hardly ideal preparation.

100%. It’s not just jut lag to worry about. The heat and humidity in that part of the world in early August will be unbearable. It’ll be a terrifying preview of what the world cup will be like in four years time.

The Bishops
Reply to  Herb Kazzaz

In a full air conditioned stadia?

Where are tickets on sale this Friday? Nothing yet on ticketmaster or arsenal.com about this match.

There’s a press conference at lunchtime today. Anticipate ticket details will be released there. They better give members 1st option!!
Wonder what the split will be between Arsenal and Lokimotiv Hammersmith fans?

Sorry for being that guy with the unrelated post, but Canada just won the World Cup bid and I’m over the moon! Very excited to host all of you in our beautiful country in 2026, you’re going to love it!

I think it’s a pretty disappointing to be honest. Only 6 tournaments ago the USA had it in ’94, and Mexico in ’86. I get your point about Canada, but judging by the venues it’s only 3 in Eastern Canada anyway (and Edmonton). So anyone on the West coast is completely ignored.. (short of going to Seattle) I would rather have seen Morocco get it to be honest, football in North Africa is hyper passionate and they have never hosted it before. Give someone else a go! If they’d put in a Morocco, Algeria and Tunisia joint bid I think… Read more »

I get the idealistic goals of taking the competition to North Africa. It would be great for the region, and with what the region has given to football it deserves a shout. But the fact is the World Cup leaves behind such a trail of resources on infrastructure that rots in its wake because it’s not planned for the actual citizens. You only have to look back as far as Brazil, let alone these countries that are too small to have any realistic start on existing stadia and whose economies could use much wiser investment.

I’m hopeful that Canada will have won the upcoming war with the US so I can have universal healthcare by then.

Where will the tickets be sold ?

What about fish and chips fan Karl O’Swelly ?