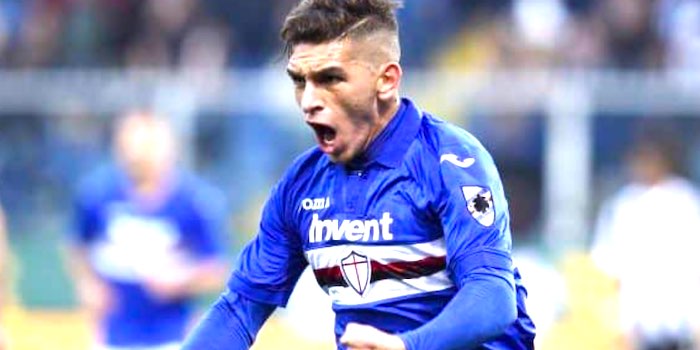 According to Italian news outlet ANSA, the possibility of Lucas Torreira joining Arsenal is growing after the Italian side brought in a replacement for him.

They have signed Lokomotiva Zagreb’s Lovro Majer for around €7m as the Gunners and Napoli circle for the Uruguayan midfielder.

It’s reported that the 22 year old has a €25m release clause in his contract which runs out at the end of June, and he could be the man Unai Emery has targetted to bolster his midfield ahead of the new season.

With Jack Wilshere’s deal set to expire at the end of this month, and with no agreement as yet on a new deal, this is an area that certainly needs to be strengthened.

Torreira is part of the Uruguay squad for the World Cup which kicks off in Russia next week, so he’ll be someone to keep an eye on when they begin their campaign with a game against Mohamed Elneny’s Egypt on Friday.

This guy possesses 70% of Cazorla dribbling and passing abilities and 80% of Kante defensive strengths. What a player we’ll be getting if the deal goes through.
COYG

More than a pest methinks. Has a bit of Arturo Vidal in him. A ball-winner with bite. Saw his highlight vid– he goes to the spot where the ball will be– not to the attacker. That’a a great strength to have as a DM.

Shhhh, Liverpool’s scouts are around. Every player we’ve been linked seem to later be linked with them. Would be a positive signing. I’m hoping the new signings will inject some drive in current players.

Re. Liverpool. For me the turning point was that 3-4 at home, we let the lead slip again and they went on to scrape into the CL by 1 point. They haven’t looked back and we’ve been playing catch up ever since.

Surely they already have enough midfielders. They just signed two new ones.

Don’t know much about him but at 22 if he is to be signed its the 1st real 1st team signing to be made under Sven that is not in their peak years. Could be a good deal if if goes through especially considering for 25mil you get an international with experience in a top European league. Whereas Man Utd are spending double on an international that plays in the Ukranian league.

this looks like a promising signing. with wilshere touted to leave our midfield looks very thin comprised of players not good enough to play for arsenal. xhaka , elneny , maiitland niles , ramsey and iwobi can play there as well. if emery wants to utilize 3 man midfield there isint enough quality options there apart from ramsey and promising maitland niles with iwobi much better of playing further forward. elneny is just a quality sub for any one of them . torreira would provide us a different option not to mention real quality. looking forward to see how we… Read more »

Thought he was defensive mid? Then adding him has nothing to do with Jack’s place in the team, unless Xhaka is going to be played a but further up. Jack needs to make a decision quickly, the old hold the club to ransom schick is not going to work under this new regime

Well it seems a bit late for him to make a decision.

It’s a place in the squad is what it means, obviously.

Well with Ozil, Ramsey, Mkhitaryan when needed, and hopefully Iwobi developing, the positions Jack would occupy are pretty well stocked. So we’ve got a ‘place’ available in a slightly different midfield position. As a DM or box-to-box harrier.

So finally , after 15 years , do we have the famed Gilberto Silva-Patrick Vieira hybrid ?

If we can get that one in player, dam, that would be nice!

They certainly worked well as a team

No disrespect , but the ratio looks like the obvious sarcasm of overhyping a youngster before he proved himself , was missed by many ?

Spikey Cazorla, me likey. Looks a decent foil for Xhaka. I’m I the only one who remembers Arsenal 2-0 Basel in 2016 CL.. that was one of the few games Xhaka and Cazorla played together in midfield. They complemented each other so well and it was an absolutely exceptional performance, in my opinion the height of latter-day Wengerball. If he is even half that player we will be lucky.

And what about Watford away at the start of that season? Genuinely some of the best football I can remember us playing since the early Emirates years. Cazorla pulling the strings, and Xhaka was on fire that day (and that was their first time playing together!). Gutting Cazorla’s injury happened so early into that campaign, as I’m sure Wenger’s plan was to eventually get Xhaka settled alongside Santi consistently as the year went on. Would be amazing to see something similar this season if the Torreira deal materialises.

No pressing from Watford and that music??! That’s 6 minutes of my life I won’t get back! 🙂

Pfft, I just spent my Sunday scouring through comps on a midfielder we may not even sign, eating junk, getting depressed thinking about Monday morning, and making a couple comments on here. That’s 7 hours of my life I won’t get back!

Everytime I see a great Xhaka performance, I see no pressing

Never heard of him or seen him play, but if his 2 minute Youtube highlight reel closely reflects his thousands of hours playing football up to this date then I am excited as punch.

A Different George
Reply to  baz00r

I think you can be confident that the highlight reel is pretty much always an accurate representation of a player’s ability.

If he does sign his nickname has to be “The Terrier”.
This guy is a bit mental. Usually we are used to seeing players like Wilshere, Rosicky who have that little burst with the ball. This guy has it without the ball. He goes mental when he has to press.
Reminds me of Flamini when he first signed for us.

Shut it, Flam’s a legend.

why do you bother?

I admire afan because it takes a lot of effort to be that negative in the face of all the positive that is happening at the club.

Majer is replacement for Praet but Torreira is 99% leavin. As a life long Samp fan I’m really disappointed but he deserves a bigger stage. You will be getting an absolute steal. He’s currently our best player and will only get better. Really good character as well. He doesn’t make stupid decisions. Can take set pieces (Google vs Chievo goal). He is consistent. Has only one weakness, aerial duels. But he bosses the midfield and breaks down attacks.

Will enjoy watching him in PM and have to adopt Arsenal as my English team.

This makes me happy and I hope you aren’t pulling our chain Phillip?? Why are you on here if Arsenal isn’t already your favourite English team? Just asking…

One of them is lying!
Reply to  Paul

They say reading Arseblog makes u intelligent….may b that’s why he’s here?

Any scouting reports on this Terreira chap? Can’t remember ever hearing of him before. Good signing ?

But as said above, if the highlights are any indication he’s all action in the deep midfield. Opposition players seem to lose possession and end up on the deck in his vicinity, in that “just legal enough“ sort of way. If so, me likey. I’ll be watching that Uruguay -Egypt with more interest now.

Easy answer, book a pre-season tour of Australia and give him 43…

We all love Jack but to be honest we need a pure DM more than anything right now. I don’t see a connection between these 2 positions IMHO…

We should have got some money for Jack a year or so ago. I hope his departure on a free is the last of the transfer/contract fuckups.

Lads, if it sounds too good to be true, it usually is. Remember that we are Arsenal, the f*ckups of transfers. Wouldnt surprise me if we argue over the agents fee for too long and Shitpool swoops in and buys him.

We may have changed SweGooner? Give the new management team a chance?

The last year of transfers has been a weird one: Out – Walcott, Giroud, Debuchy, Cazorla, Ox, Sanchez, Szcz, Perez, Campbell and Coq. While Kocielny isn’t likely to reach Bossielny levels after his injury + Mertesacker retired and Wilshere is 50/50 in or out. That’s close to 13 players and I’m pretty sure I’ve forgotten someone as well. In: Mhiki, Auba, Mav, Kolasinac, Lichtsteiner and Lacazette. With half the squad changed. New manager and new staff there is a massive task ahead in finding a balance and common ground this year. How to get the players to get along both… Read more »

i sure do hope so. But given our history in the transfer market, im not getting my hopes up. Torreira seems to be someone that would tick all the boxes in our search. Someone draw similaritys to Kante, and i love Kante! But, as so many times before i get my hopes up just to be let down. Last time that happened was when Allegri was in the mix. Im not disapointed with Emery, but before he was even mentioned, i hade my hopes for Allegri. And to everyone downvoting my comment, the truth hurts.

The more I read about this guy’s football qualities, the more I fall in love with it. My fear is that Arsenal will keep haggling over the price until another more serious club comes and hijack the deal just similar to the Kante “near” deal. Hopefully, this term will be a more success story that will not only energize the fan base, but will excite it too.Arsenal for life!

The hagglers are gone though. And unlike the previous umpteen windows, rumors of Arsenal in the market are turning out to be more frequently true. It smells a bit like an entirely different mentality and approach to transfer dealings so far. It’s quite a fresh take and a bit more fun to watch so far.

If this link is concrete, it’s very encouraging to see that we are looking to address the key weak areas of the team over recent years. Also need to get a new GK for sure.