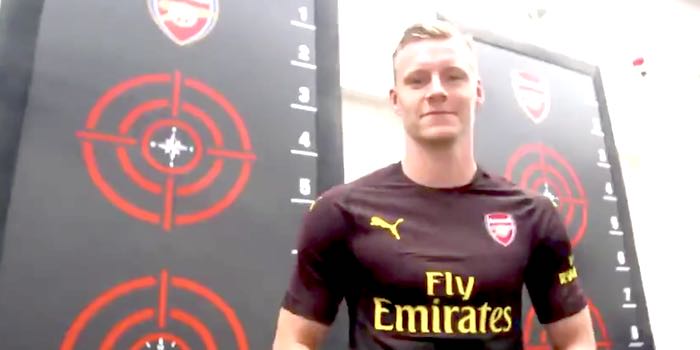 Arsenal have confirmed the signing of Bernd Leno after they were beaten to the punch by his former club Bayer Leverkusen.

The Bundesliga side revealed the deal had been done with a Tweet earlier this evening, thanking the 26 year old for his seven years at the club and wishing him luck in North London.

Now, Arsenal have announced it from their end, making the German international the second official signing of the Unai Emery era.

He follows veteran Swiss defender Stephan Lichtsteiner who joined on a free transfer from Juventus earlier this month, while the Gunners are expected to bring in Lucas Torreira from Sampdoria and Greek defender Sokratis Papastathopoulos from Borussia Dortmund.

Arsenal head coach Unai Emery said of the reported €25m arrival, “We are very pleased that Bernd Leno will be joining us.

“Bernd is a goalkeeper of high quality and experience. He has been a top performer and regular number one goalkeeper with Leverkusen in the Bundesliga for the past seven years.

“We are all excited that Bernd has chosen Arsenal Football Club and look forward to start working with him in pre-season.”

Welcome to the Arsenal!

I’m buzzing over this, I’ve watched him plenty of times for Leverkusen and he appears to be a very confident and tough GK. Always appeared to be unfazed and an assuring presence.

On a side note, not sure how well he speaks English but I think keeping Lehman could have been useful and could have helped Leno settle but if the new manager doesn’t want him as part of his coaching staff then I fully understand.

Haven’t felt this excited about a new season in years. COYG!!!!

food for thought
Reply to  Gooooonnnnnnaaaaaaa

he should definitely speak English. i think it’s the 2nd language in Germany. i’m just thinking if he’s a German and doesnt speak English, does that mean that Jens didnt speak English when he came to Arsenal too? that explains why he was mad and shouting all the time hahaha

Who are you and what have you done to my Arsenal?

to be fair, we’ve been plugging the gaps we needed to over the last few years (GK, CM, CF, LB), it’s just that the players signed haven’t done all that well

No. We were very lazy in plugin the holes, and this an all new attitude we have never witnessed before!

Yeah like that summer when we desperately needed a proper DM (for years already) + someone to at least cover up for Giroud yet we ended up signing zero outfield players which turned out great considering that all other big teams somehow went on to f up massively and we handed the title to Leicester.

My kind of summer. Not.

Sheesh…reading that just took the biscuit from my funk :/

yeah 2015 summer was scandalous, no arguments

since then we’ve more or less signed the positions we needed, but the players haven’t worked out so far (by and large)

let’s see how the new guys do. maybe the old signings will fit better in a new system / regime as well

Yeah, but you also have to consider why they haven’t worked out. Let me pick out Xhaka – he’s a very specific kind of a player and if you want to sign him, you better have a very strong vision of what you want to play otherwise he’s prety useless. Yet we signed him and then started wondering what he actually is. I thought we’re signing a DM, yet AW labelled him as a box to box CM, only to re-label him as a deep lying creative midfielder. Since he’s been with us, he never had a stabil midfield partner,… Read more »

If Xhaka could stop taking 10s to make lateral or recess passes when a sheet puts pressure on him it would already be a subtential gain. Because by doing this, it slows down the game or puts us at risk with a hazardous pass.

Yeah Xhaka’s likes to play the game slower and he needs to be much faster and more vertical with his play if we’re gonna become an effective counter-attacking team.

Le no goals in.

Vehcede
Reply to  M for Money

Stop it. Get some help
On a more positive note, I’m also very excited about this signing

Reserving judgement, Ive been burnd too many times before.

Welcome Bernd. Don’t get your fingers…..Bernd……?

It’s all in the delivery eh mate? 🙂

Or the interpretation….or total lack of it….?

Do you really think people didn’t get it

You only have to read the response to a lot of posts on this site, to realise that literal and tongue in cheek, is not a distinction some care to make.

Arsenal signing players early in the transfer window. Loving it!

I haven’t followed Arsenal that closely for the last year but seeing f****** Aubameyang sign last year (just incredible)!!! and now a really good, underrated GK like Leno signing is such a promising start to the Emery era. I might just start following the team again. I have no doubt that Leno will be the 1st keeper in no time. Now bring in a world class center back and a world class midfielder and we’re set.

Please downvote this numpy everyone. Thankyou.

Is it just me or is this looks like a cohesive transfer structure instead of a summer of dithering?

Welcome to a new BFG.

Leno he….He is so strong,
And he’ll be your friend
He’ll help you carry on
For it won’t be long
Til he makes the save
Our goalie to lean on

Can’t say I’ve seen him play but Germany have a lot of goalkeeping talent and he appears to be fairly highly rated in the Bundesliga. At 26 years old he’s young for a keeper and will hopefully make an impression this season. And, of course, he looks like he belongs in an Arsenal shirt, so that’s always a bonus! Welcome to Arsenal Leno!

Wow. Today I took a step back and realised how good of a squad we are gonna have at the start of the season. Leno is an amazing buy and I can’t wait to see him develop with us. We have just pulled the best signing of the summer, I can assure all our fans of that. I am really impressed. His only problem was staying in Germany for too long, he became complacent in a league dominated by him and Neuer. A new start will do wonders for him. I see Cech being ousted before Christmas. I can’t even… Read more »

This is possibly THE most exciting Arsenal summer market ever!
Impressive work. Now get us that winger.
it’s unthinkable that a club of such stature basically has zero wingers!

Did anyone else notice in his announcement video that his gloves said ‘Leno 1’ on them? Could that be a sign that Cech is on his way?

Pleased that we have signed another keeper, although I remain unconvinced that he’s any better than Wojciech Szczeney. Time will tell and welcome to the club!

Just watched Szcyeney do his trademark charge out of goal to allow a disasterous second goal against Poland. Maybe our memory of ‘smoking’ Wojciech have become clouded by his time away.

I thought the same

To be honest it was a shocking decision from the ref to allow a player to come in during a counter.

Funny this time Szcz didn’t have the balls to take Niang down and blow his WC as he did in the opening match of the Euros.

Szczesny couldn’t be remotely blamed for that goal. He was put in an impossible position and came out as quickly as he could.

Had a lot of discussion about that one. While the Ref couldn’t have known there would immediately be such a sudden turn of play, it sure was in the purest sense unfortunate and a bit unfair in effect for the last defender and Szczesny to have to suddenly cope with a player nobody knew was going to be in play.

And with the noise in those stadiums it’s doubtful they could have heard a shout from the bench.

Unsurprisingly he wore 1 for Leverkusen…

His other glove has a 2 on it and his hands have matching tattoos so he doesn’t get them mixed up.

Welcome to the arsenal world bernd.we will love you as long you keep your sheets clean.But once you start messing it up,you are on your own.We love to kick the dog when its down around ‘ere.Just giving you a heads up!

Seeing Sczez at World Cup today may quieten some who would have preferred him back. I’d love this guy to be the new Lehman, especially as he’s just left!

Realise you just made my point 30 minutes earlier and expressed it better. Have an upturned thumb.

He’s now a world class keeper and has a great record at Juventus already. Didn’t do anything wrong today. However we let him go so good luck to Leno.

it is so refreshing to see Arsenal being proactive in the transfer window instead of the usual long drawn out transfers, and wait till literally the deadline day to act.

Everyone, including Ornstein, is reporting 22m blogs. Source on the 25m?

Is it including the bonuses?

Pounds or Euros? Off the top of my head, the exchange rate would probably be around that.

Chelski fans don’t even know whether their manager is coming or going (let alone star players)?

Get back to Leverkeusen and bring Brandt and Bailey with you pls.
Welcome to the Arsenal Bernd

Another quick and good signing.
What strikes me most is the quality for value that we got, considering the present hyper inflated market (just to draw a parallel, Roma is asking €70m for Alisson)

Ospina doesn’t entirely convince. Cech is getting on.

Hope he fits the billing though.