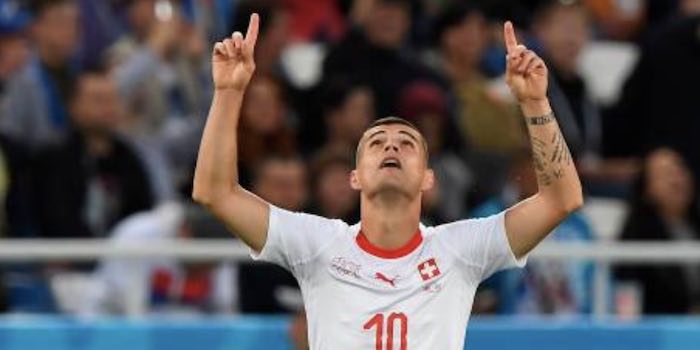 Granit Xhaka, along with fellow Arsenal teammate Stephan Lichtsteiner and countryman Xherdan Shaqiri has escaped a ban following his goal celebration against Serbia on Saturday night.

The midfielder faced a possible two match suspension for what might have been considered a political symbol inside a stadium, which is contrary to FIFA rules.

However, the game’s governing body handed down a ruling this afternoon which has led to all three players being fined for ‘unsporting behaviour contrary to the principles of fair-play’ but no suspensions were handed out.

There were also fines of 5,000 Swiss francs each for Serbian FA president Slavisa Kokeza and Serbia head coach Mladen Krstajic for comments they made to the BBC after the game about bias against their country from FIFA.

It’s good news for Switzerland who face Costa Rica in their final group game, looking to qualify for the knock-out stages.

Note: Comments are closed for this article. We hardly ever do this, but enough was said on the previous article about this matter and its wider context.

Liverpool 3-1 Arsenal: By the numbers

Xhaka made captain of Switzerland