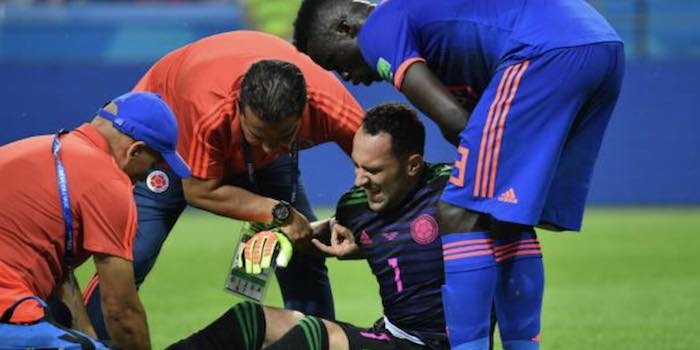 David Ospina’s agent says that the Colombian has several offers to secure his services, but that his wages at Arsenal and what the club are seeking as a transfer fee ensure a move is more complicated than people might think.

The Gunners have signed Bernd Leno for £22.5m, and handed Petr Cech the number 1 shirt, meaning the 29 year old is essentially the third choice right now.

A move makes sense on many levels, and Ospina is seeking to stay in Europe despite interest from Boca Juniors in Argentina.

Speaking to golcaracol.com, Lucas Jaramillo, said, “David has had an excellent World Cup, it has been very important for him, it is not a lie for anyone to say that he finds himself uncomfortable in Arsenal.

“What happened in Russia will be very important for his future.”

And on what might happen this summer, he continued, “Well, we have to wait.

“There are several clubs interested in David, but leaving Arsenal is not easy because they’re team that pays well and asks a lot for the player, and we must add that he has a contract for two more years.

“The priority is Europe, but as I say, we have to wait.”

An agent doing what agents do best, agenting…

Jack but
Reply to  Thierry Walcott

I am an agent…he is taking a lip

I read this as the code name for a secret agent.

He’s about to be more comfortable, as he’ll be watching the games at home if he doesn’t leave.

Diving off the sofa?

Let me decode:
• “Arsenal have 4 senior Goalkeepers and an overstretched squad, i also know my client doesn’t have a future at Arsenal, but they’re in just as much need to get him off their books, as he is to move somewhere else to play, so I’m just reminding them not to make this too difficult, as they certainly don’t hold all the cards here”

HOW is he under contract for 2 more years? Signed a 6 year deal in 2014? I don’t recall an extension, but could be wrong. Either way… its unreal!!

Either math is not your strong point or you’re baiting!!

On a separate note…. The ITK’s are trying to suggest we’re in for Dybala or Dembele….. Apparently both players are keen to play under our new manager Maxi Allegri

This entire transfer window is so weighted against premier league clubs, that i suspect next year’s summer window will revert to type. Knowing that the window closes sooner, European clubs can ask for prices higher than the already inflated prices, knowing the truncated window will make teams scramble. And buying clubs in Europe can relax, knowing that English clubs that are looking to offload in aug/sep are eventually going to blink and reduce the asking prices in the end. Basically they’ve got us by the balls, and I wouldn’t be surprised to see the likes of Ospina, Campbell et al… Read more »

This is exactly it… our squad is far too big and we have too many players to register already, Agents and clubs know we need to sell before we buy, we’re in a very weak selling position, also our fringe players are likely on substantially more than most senior players in Europes other top leagues. All the extra money in the PL and football doesn’t necessarily produce more exceptional players, particularly if your too scared to give youngsters a chance, it just creates two separate PL markets and a market for mid/lower teams in Europe’s other top divisions, where all… Read more »

£1mill for Campbell
£2mill for Ospina

For 2 more years? Has he signed a 6 year contract in 2014? If he’s not willing to move on due to too low offers in terms of salary, as he did the previous years, we could have a little problem here. Can’t see us selling Cech after we have him the number 1 shirt just weeks ago and also don’t think it would be healthy to start a season with both of them and Leno in the squad.

Got a feeling this one’s going to drag on and on, and on.

He’s got two years? Give him those USB sticks. Time to convert him into a right winger.

Bullshit, just take a pay cut if your offered 1st team football elsewhere. He won’t be scraping by on minimum wage, will he?

You would like to think, especially at a later stage on your career, that a player would prioritise playing football over salary. Afterall whatever happens he will still earn more in a week than most people in the world earn in a year. There are millions of people who play football ever week for free and it’s sad that money blinds those with the most talent that they lose sight of the sporting element. Stuart Taylor is a tragic example of this for goalkeepers and I’m sure when he’s old and trying to tell his grandkids about the career he… Read more »

How long was his contract man? Seems like he’s always got 2 years left!

Goes against popular opinion here, but I actually quite like Ospina, I hope there’s a way he can get a move to a good club and we can make a bit of a profit from him. If you said there was a 29 year old keeper, first choice for a top 10/15 ranking FIFA nation, with 90+caps, over 250 games for top flight European teams, regular European experience, and a better saves to goals against ratio, distribution accuracy and few goals per game conceded than England’s fist choice keeper, with 2 years left on his deal, you’d be asking for… Read more »

I’m with you on that.

And love your avie, BTW.

We made him available last summer when he was 28 : he wanted to leave, we were prepared to let him go, we were asking for a reasonable fee, he’s not on large wages in Premier League terms….if it is true that he would walk into most premier league sides, then he simply would have moved to one. As it was, there just wasn’t interest. Why ? Maybe all those who ‘didn’t give him the benefit of the doubt’ are simply seeing the same thing the wider football world sees regarding his abilities ?

GoonerMike
Reply to  Kwame Ampadu Down

‘the wider football world’…..hmm, I dont think so

Kwame Ampadu Down
Reply to  GoonerMike

So if no clubs were prepared to buy him given the circumstances last summer explain to me why I am wrong ?

Cechmate
Reply to  Kwame Ampadu Down

We sold Sczh for 10M and he was actually worth much more than that, Fabianski was a disaster in Arsenal but is a lot better when he moved out, Cech was phenomenal in Chelsea but average here. What all this shows is that we make our GK’s look ordinary than they are. Our defense and our midfield do not cover them adequately and our GK’s look bad and their value in the market goes down. Besides, our wages are pretty high (comparatively) which makes it difficult for clubs below us to pay big on transfer fee and since we make… Read more »

David Ospina has to be the least remarkable player whoever played for us. He wasnt bad, but by no means any good. He was just, meh

Looking for a Better Name

Agent: “Ospina wants to leave the club but the economic incentives are preventing him. It’s not fair”.