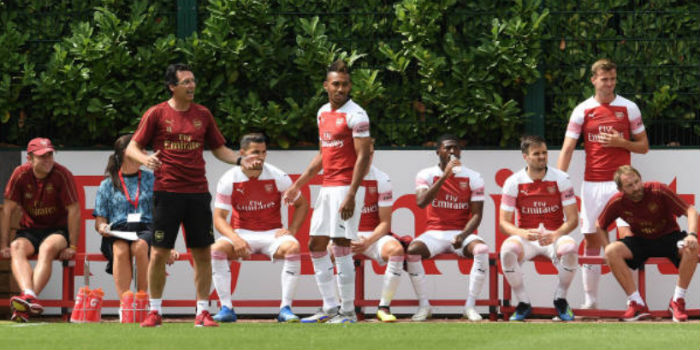 Arsenal have stepped up their pre-season preparations with a 9-0 win over Crawley Town in a behind-closed-doors friendly at London Colney.

The match, which was not advertised, saw Unai Emery field a strong line-up against Harry Kewell’s League Two outfit.

The Gunners weren’t due to play until they face Atletico Madrid and Paris Saint Germain in Singapore next week, so we can only assume that it was a late addition to the schedule.

Bernd Leno made his first appearance for the club since moving from Bayer Leverkusen and Matteo Guendouzi, who made his debut off the bench against Boreham Wood on Saturday, also got a run-out.

The whole “it’s coming home” business was cringeworthy enough during the World Cup and I was really hoping we’d be done with it for at least 2 years. It irritates me like mad, and I know the sentiment is the same for a lot of people. The implication of entitlement, like football owes you something, is beyond annoying. We’ve had to put up with United and Liverpool spouting this garbage for years and I’d really prefer we weren’t lumped in with their lot. Satire or not, it is really irritating and the sooner it stops, the better. Let’s actually get… Read more »

Here where you’re coming from, but just in case – I do know it’s cause football was started here?

Yeah I hope it doesn’t stick around too long

Join the discussion…You’re a little ray of sunshine, aren’t you?

The only one coming home is you!

It was a terrifying clown that lived in storm water drains and ate children. It can stay down there! I don’t want that fucker coming anywhere near my place.

Can’t wait to see how we line up against City? I think the more high profile friendlies will give us a better idea, but right now I don’t have the slightest idea apart from I expect we’ll start with a back 4.
Hopefully it’s a fresh start for everyone with no pet favourites.

Gah, why would you say this?
Talk about super jinx.

Everyone knows the rules of football jinxing; outwardly play down your chances but internally scream “we’ll f*cking do them”.

City have almost their entire regular starters coming back late because of their involvement in the world cup, Chelsea seem to be in a mess appointing someone so late and all the late changes happening to the squad (not to mention their managers Pochetino 2.0 – he hasn’t won f*** all). Mourinho today said their preseason is really bad and he’s getting the excuses in already, and apparently Sanchez won’t join them for preseason because his visa got rejected LOL!!! Spurs are shite and always will be so I don’t, never did, and never will consider them title contenders. To… Read more »

People may think I’ve gone nuts but am having a bet on arsenal doing a double this season. ..
COYG

It’s quite refreshing to see Arsenal thrash a team without me even knowing they were playing. The last time that happened I was aged 6.

Anybody else getting a breast enlargement advert on here? Not that I’m complaining

Nah. Hair transplant. Not as much fun…

Curious. I get ads for hair transplants in breast implants.

Same. Hair transplant…. One of the diagrams looks suspiciously like Zinedine Zidane…

I get ads related to my recent internet browsing habits. I guess you do too…

I get ads related to the wishes I place on shooting stars. What are you doing wrong?

Blokes in army gear with hands clenched into fists. I think it’s a trailer for a Village People tour..

Mine was for kfc so I guess we are both thinking about getting our mouths around a large breast!

I get ads about penis length reduction for men who are too big.

You might have reverse-search cookies, they often find ads for the opposite of what you’ve bene searching.

Be interesting to see whether Perez stays now the Ox and Walcott have gone…… As wingers go I’d rather keep him than Welbeck.

Yeah, his passing and movement was really good that season he was here. Could be his way in.

I have the least of ideas as of why arsene didnt use him.. heard that he was a dependant with his left too much.. sad ..if thats the case

It was the same with Podolski, similar players too

It’d be interesting to see if Emery wants to play with a real lefty on the left. Talk about a novel idea. I mean, sure Ozil’s left footed and lined up there a few times, but he goes where he goes.

8-0 Boreham Wood, then 9-0 Crawley. At this rate of progress (following the inevitable massacre of Atletico and PSG) I fully expect 15-0 against Man City on the opening day.

Please .. dont eat chicken with a gulp thinking you would do the same with ostrich

Greatly appreciate Emery giving everyone another look before he pairs down the squad for the “serious” friendlies. Never sad to see more goals.

Atletico and PSG watch out! This is the team who defeated Crawley and Boreham Wood with ease.

Seems odd that Leno, Cech and Martinez got minutes. A half each seems the minimum requirement to see them in action

Then again, it’s entirely possible this wasn’t a 90 minute game

Why is that the minimum requirement?

Sad that We can’t see a highlights video.

Joking apart, what’s the value of these games? Smash some part timers 9-0? Waste of time, there’s more football value in playing the reserves. If they need to get fit, at the very least play Championship sides. Or is this all a bullshit PR exercise? “Look how ready we are! 9-0!” Surely no-one is buying that?

Emery is clearly trying to figure out his team. Sure, the scoreline doesn’t count for much, but seeing the players in a match against professional opposition will be invaluable to picking the starting XI come match day 1.

Billy batts? More like Billy No-Mates with that kind of stinking attitude.

Probably does more good than scrimmages against the same guys you scrimmage against every day in training.

It was behind closed doors. It had no press coverage. It isn’t featured on the official website. How on earth can you construe this as the club saying “Look how ready we are! 9-0!” Perhaps – and this is a bit left-field – it’s just a new manager keeping his players match fitness up, and testing positions and capabilities. Nobody puts any seriousness into the scoreline, but surely a bit of happiness that we scored nine is permitted?

Good to see the strikers – Perez, Auba and Laca scoring.

Also the Jeff. He’s an interesting one cos you feel its hard to discern his best position.

The task now for Emery is to test the defensive side of the game. We will soon get a better test in Singapore.

Both Nketiah and Nelson look strong this season. So hard to choose between the two.

I wonder if the club are going to say anything about this — or whether Jorge has further details? As has already been remarked, 3 goalkeepers in 90 minutes seems unusual, did Cech really need to play?

I only liked the world cup because I got to drink loads of beer and sniff loads of gear ?