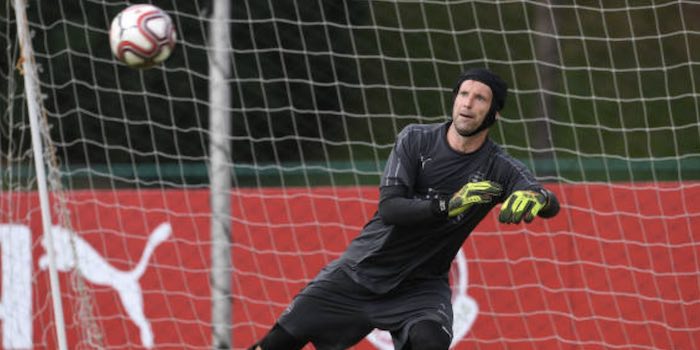 Petr Cech says that the new signings Arsenal have made are settling in nicely on the tour of Singapore, and that the initiation ceremonies will take place today (Wednesday).

It’s traditional for new players to entertain their teammates with a song, a kind of ice-breaker, but the veteran keeper believes they’re already feeling comfortable within the group.

Speaking ahead of tomorrow’s game against Atletico Madrid, he was asked about the likes of Sokratis Papastathopoulos, Matteo Guendouzi and Bernd Leno (Lucas Torreira and Stephan Lichtsteiner remain on holidays following the World Cup).

Q: How are the new players settling in?

A: They’ve been doing very well. We have a really good group of people in the players and staff which makes it easy for the new players. As well, you always know someone from the team, someone you played with from the national team or was an opponent.

Q: Any initiations yet?

A: We haven’t started yet but there are first rounds due today!

He was then pressed about the arrival of the club recording goalkeeper signing, £22.5m German Leno, and the rumours about a return to his former club Chelsea.

Q: How does Bernd Leno coming in affect your position?

A: All you can do as a player is to work hard in training and show your manager that you could play. This is what I’ve been concentrating on, I do my job as best as I can and let the manager decide who’s in the starting line up.

Q: Mentally, how is it like to have Arsenal invest in another goalkeeper? Kind of like when Courtois joined Chelsea.

A: It has happened many times in my career. As I said, the only thing you can do is work hard and force your way through to the starting line up. In football, there is no sentiments about this. We just got to do our job and see.

Q: There has been rumours about a return to Chelsea. Is that something that would interest you?

A: I’ve said many times, I’m here and I have 1 more year in my contract. The club is counting on me so far, so my position is here. I’m concentrating on my job and try to keep the number 1 jersey. This is my task and what comes, comes.

Credit to our correspondent out in Singapore, Hatta Aziz of boothype.com – for more from the tour, including behind the scenes Instagram stories, check out instagram.com/boothypeofficial

Chelsea 0-1 Arsenal: By the numbers

Leno: The problem? We didn’t take our chances

That was an extremely enjoyable note for the interview to finish on!

I’d downvote myself now. The interview is quite good but Blogs cut off half of it to include in another post.

Good that he will push himself still and hence Leno will have to try hard and get better as well.

Lean on me, when you’re not strong
And I’ll be your friend
I’ll help you carry on
For it won’t be long
‘Til you’re gonna need
Somebody like Leno