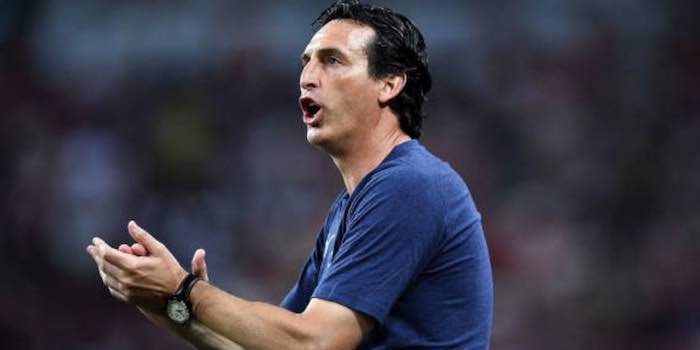 From hard work to pressing, this is where the methods employed by Unai Emery are coming under the microscope.

After the 5-1 win over PSG in Singapore today, the Spaniard gave some real insight into what he wants from his team, and how he set things up to try and get the best out of Mesut Ozil.

The German opened the scoring in the first half, and the new boss expanded in some detail as to what he was thinking.

“We want to give him and our players the position they feel most comfortable in on the pitch,” he said of the German.

“He started today at No 10 with Matteo and Mohamed behind him. The first one would go up and then find him between the lines, or sometimes Mkhitaryan.

“When we do have the ball, we can press with the striker and a No 10 almost like a 4-4-2 in a press. It depends because Mesut can play on the right and go inside, driving in to open up space for the right back.

“We want to find a space for him and the other players where they can use their qualities through good positioning. I think in the first half today we played good with quality players, but I want to improve this pressing.

“In the second half they were tired, but the young players gave us the pressing back and allowed us to change our positions and play with three in midfield.

“Tactically, we’ve been working all week in training and watching movies. The first idea we are working on is without the ball and the right place to be pressing.

“I am happy with how the players played for the first time for these three players [Iwboi, Elneny, Ozil].”

It’s certainly interesting to hear the head coach lift the lid on his tactics in that way. It’s unusual for managers in England to do that in any great detail, so let’s hope he continues this throughout the season.

So glad that we are becoming a team that presses and looks to win the ball back higher up the pitch. That was one of the more frustrating things to me about Wenger’s tactics in that he preferred to sit back too often. You certainly can’t press all match, but doing it early and at different times can certainly set the tone for the team. Plus it gets the crowd behind you and forces the opponent to feel uncomfortable leading to mistakes.

I remember a game at the Middleastlands last season where two Arsenal players were pressing and the rest of the team were falling back! It’s going to be very interesting to see how Ozil fits in with this new pressing style: he may have to do more running than he’s used to. I wonder what the Wenger-worshipers will say when we finally look like a world-class team under Emery?

A very impressive result today against one of the top sides in Europe. I can’t wait for the start of the season!

Might find it hard to believe but he already is one of the guys who runs the most in the team.
And yes, pressing is sexy!

Not one of the best sides in Europe without their best players.

Still not moved on then Fats? Sad.

Throughout (and post) this whole Wenger-In-Out saga/endeavour, many supporters from both ‘sides’ have emerged with a large measure of class and dignity intact.

Fatgooner is not one of them.

I on the other hand always eager to read a fatgooner comment daily. He has his strong points and views.

Likewise. And it really is quite entertaining. 😀

Speaking of entertaining, what ever in the world happened to Rambling Pete? 🙁

The Wenger years are over. Time to look back with some respect. Invincibles.

Give it a rest will you…

I’m glad that it seems like he actually knows what he wants from the team. I’m excited.

It is not like we never pressed under Wenger. There were games even last season when we pressed a lot and those were great games. The problem was why we didn’t do that in all games.

Lot of information given by Unai that Pep was waiting for to prepare that first game.

Product of a leaking condom
Reply to  Heavenly Chapecoense

That’s the kind of fear Wenger got us accustomed to in his final 8 years at the club… It is a brave new world buddy. Time to start believing again… #UnaiLoading…

I’m loving this kind of talk!

I hope Torreira helps with this defence, because even with nearly our first choice back 5, we looked vulnerable against a third choice team of kids. I know it’s pre-season, but we didn’t look any different when defending.

Yeah, agreed, obvs ridiculously early to make any real judgement, but it’s not there yet, certainly not like watching the blue samurai press Belgium out the game (for 70 minutes at least). Took klopp and poco a year and a lot of changes to get theirs working, so will be impressive if Emery can get it working effectively this season.

It’s not going to be an instant fix to be fair, and never was

I’m a bit concerned he said the players were tired in the second half, fitness levels should be creeping up now

to be honest,it was warm and humid.

Warm and humid AND only 2 days since the last game. I think we are on track for the start of the season.

On that point, props to Bellerin and Kolasinac for the amount of time they were out there over the two games – they must’ve been knackered.

And we’d be right to be a bit concerned if they were stuffed after 15 minutes.

Players generally tire in the second half.

They played a game 2 days before

We did press under Wenger. Get the ball within 3 seconds or fall back was the rule.

And don’t forget constant pressing comes at a cost. That energy spent is less energy available for attacking and everything else.

The concern is the (so called) smaller teams are just going to give us possession and sit back which kind of nullifies the press. Anyway let’s see how Emery reacts to that.

Agreed, in the first half hour of this game it was PSG pressing us and we looked a little unprepared for that

And this is a youth PSG side.

So refreshing to see a manager so passionate. I already have a very good feeling about this guy!

Ah yeah, Wenger was well known for not being passionate. Very astute point.

Last two seasons, it became obvious that we were disjointed in pressing the opponent higher up the pitch and very poor as well when being pressed by opponent! I hope he also is working with the team on the latter.

We need to avoid their press by being able to release wingers quickly down their flanks in the space they vacate. This particularly so as to catch the other team before they can reorganize and sit deep. This has been the trend in recent years but we have been always too ponderous in the development of our attack. We no longer have Alexis (in particular) but also Gnabry, the Ox and Walcott to some extent. So unless its Bellerin (which carries its own vulnerabilities for us), we need to wait for players to come up to support and our attack… Read more »

I know we don’t have a bunch of classic wingers but it’s not like we have no one able to play there. I think when you play Lacazette up front and Mkhitaryan and Aubameyang on the wings you have that speed as well as the ability to beat opponents 1v1, to deliver the final pass or even to finish. Iwobi, Nelson and to some extent even Mesut and Aaron are capable of doing a job there. Eddie didn’t look too bad on the left too in the friendlies. And even Lacazette came through as a winger at Lyon. I know… Read more »

Not completely sure about your closing statement. It’s not clear why him telling everyone this information is a good thing. There’s an obvious reason for not having to give this information out that I do not need to state here.

…maybe he should save it for his retirement book. Incidentally, still waiting on Arsene’s

This is the preferable tactic for most teams. BUT it is nothing new nor the be all and end all. Wenger tried to have his team press high before and it worked …for short spells. The issue is more how to sustain it and how to press together better. Still, should it not work out, we should also do well to remember that many teams (including France) this world cup proved that surrendering possession is not necessarily detrimental. They adopted the coiled spring approach and had assets to complement the ability of their back line to exploit space created by… Read more »

Still ambivalent about Ozil as das Kapitan. I suppose there are 5 captains so its more a motivational thing to show the love to the German and contract to Ramsey. Frankly we need someone to be held accountable for performances on the pitch. All this new age many heads approach merely affords players more space to hide from responsibility. Ozil by nature (and he is not going to change) is not the sort of player to grab you by the gruff of the neck and haul you forward when the chips are down. Its all fine and dandy when things… Read more »