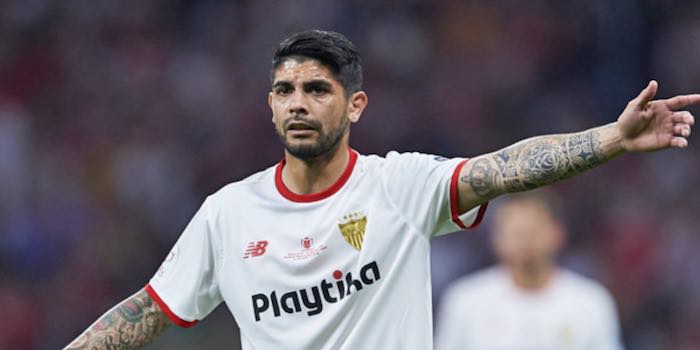 According to Spanish publication Marca, Ever Banega has told Sevilla that he’s happy at the club despite interest from Arsenal.

The Argentina international has been heavily linked with a move to the Emirates in recent weeks with new coach Unai Emery thought to be keen on signing a midfielder with whom he worked at both Sevilla and Valencia.

It’s claimed that, since returning from the World Cup, the 30-year-old has eased the worries of the hierarchy at the Ramon Sanchez Pizjuan and that it’s unlikely he’ll push for any suitors to trigger his €20 million release clause.

Banega made over 50 appearances for Los Rojiblancos last season having returned from a year on loan with Inter Milan.

Sevilla do still have a headache over the future of Steven N’Zonzi, another midfielder that is said to be on Arsenal’s radar.

Perhaps we’ve switched attention to the Frenchman having got wind of Banega’s decision? There is a catch for the Gunners, he’s €15 million more expensive, which could prove a sticking point.

Buy N’Zonzi and Torreira and then it won’t matter

Never mind both, just get Torreira over the line and I’d care even less about this Banega story than I did in the first place.

But we would love you forEVER BENEGA!

i think buying banega makes more sense than buying nzonzi. nzonzi is a defensive midfielder , a good one but still he cannot play any other position. banega can be played all over the midfield. he can play xhakad role or with his industry and creativity he can play further forward as well , as far as no 10 position. And he is a good player , i hope we get him

yeah, nzonzi is not the player we need. He’s not that mobile, he’s not a forward thinking player either. He’s like a less energetic Elneny, risk-averse and can only see what’s infront of him. Ba nega has more about him, and a better final ball. nzonzi would be ok squad player but I was looking corward to banega

At the moment we only have one deep lying playmaker, might not hurt to have two …

Rumours about Juve wanting Mustafa, a deal with Rugani coming the other way would make me very happy.

Shame. He is class U really wanted to see him with us.
Thought he was the best in his national team in this WC.

That’s not saying much to be honest

A Different George
Reply to  Red-Sky

I thought he looked very good in one match, including the wonderful pass to create Messi’s goal (of course, it would not have looked so wonderful for any other player, since it was on his hip, but Messi made it look like it was perfectly placed). But he was completely overwhelmed against France, lost the ball regularly, could not deal with the pace of France’s attackers (well, except Giroud). I suspect neither of these matches is typical of his day-to-day worth and unless you have seen him regularly at Milan or Sevilla (I have not), it’s impossible to judge how… Read more »

Bit disappointed tbh. Thought he’d do well with us – a creative, experienced player who’s a seasoned international and Europa League winner. Would definitely have brought a good mentality and work ethic with him and likely at a decent price. We mustn’t forget that we’ve lost two creative midfielders in Wilshere and Cazorla so it is an area where we should be bringing someone in, especially given that with a long season ahead we will at some point need to rest players and that there will likely be injuries along the way. If the Banega deal isn’t meant to be… Read more »

We should not buy two players in my opinion, our youngsters are ready for the next step.

ha, nothing changes, we always can get the crap players, but we can never get the good ones

So Auba is crap is he? One of the top strikers in Europe last few years, in his prime, and 10 goals in his first 13 games for Arsenal. You are speaking nonsense.

Don’t feed the troll your comments or your thumbs.

sorry I thought he was just genuinely thick…

He is. But first and foremost, he’s a Spurms troll. Kind of surprised he hasn’t been banned yet.

I’m not too fussed either at missing out on Banega. Quality player but we have similar skillsets among our ranks already. Nzonzi would be a very welcome addition for me as he has such a physical presence as well as the touch and passing abilities to slot in very well. He’d be an upgrade on Elneny in almost every aspect, except age. And hair.

And mobility, Elneny covers a lot of ground.

I really don’t think Nzonzi is that much better than Elneny, and the Nzonzi situation has the feels of “grass is greener” with him amongst Arsenal fans.

Personally just get Torreira over the line, and I’m happy with DM options of him, Elneny and to give AMN more playing time.

I’d rather that money go to us getting a proper dribbling winger, like how we were linked with Malcom and Pavon.

A couple weeks ago (based on reports on this site) I was looking forward to seeing Banega and Ramsey in the same midfield. Now I am ever so confused.

we are ALL confused

Ha! A Banega pun and Ramsey reference all in the same line!

It does add some spice to Ramsey’s habitual, “the lads did ever so well.”

This story had no legs in first place. I don’t buy the NZonzi either as it would hamper AMN’s development. Torreira is a superb signing and one that was very much needed. We need a tricky winger and I don’t see any name on newspapers which are usually creative.

He knows that he would be a squad player, whereas he is a regular for Sevilla and Argetina as things are. If he did give it would be for money, or unhappy with the manager at Sevilla. And if those were the case we should be wary.

Not worried to be honest. As long as Torreira gets done we will have the DM who can drop into cb that we need. Then that leaves the following to fight over the two central midfield spots:
Xhaka
Mikhi
Ramsey
Niles

And Elneny to cover DM.

Would be useful player against an opposition high press or similar tactic.

Not too fussed really. I think there are lots of other players who could be equally good. What we do lack in midfield is experience so hopefully someone else could be identified to play in there sometimes.

Rambling Pete was actually Arsene Wenger in disguise, but he has now left the building to a smattering of applause.
Has Rambo signed yet? Torreira? Aaron Mooy? I reckon Mooy would be brilliant for Arsenal as midfield Tiger.

Lot of people not fussed apparently. Whether or not we NEED him is one thing but the fact is you’d struggle to find better for the fee being bandied.

He would have been a good alternative to the always injured Ramsey. With Wilshere gone, Arsenal are lacking attacking midfielders, well defensive also…

Are we really lacking Attacking midfielders?
Ozil
Ramsey
Iwobi (hey, I didn’t say he was great, but still young)
Mikhi
Then have the likes of Nelson, who needs game time.

Personally I think Xhaka can play that role as well if required.

As long as we have Torreira wrapped up I don’t mind missing out on him. I’d prefer that the club turned their attention to a spacy winger (Lozano I’d like) and another center back (Soyuncu or Pavard). if we manage that than it’ll be an awesome summer!! COYG

Ya gooner
Reply to  Timack

Pavard’s price has gone up by at least 20m thankd to that strike.

I’m not really fussed by this. Banega is too old for my liking. Would prefer we brought in someone around 25-28 who has more of their career ahead of them. N’Zonzi is a player who is so hyped yet I’ve never felt he was any more than a competent player. If he is so good why has no one bigger than Sevilla ever gone in for him? I don’t think he would be a disaster or anything, just very… whelming. He’s also pushing 30 and we have several players around that age bracket now. You do get the sense now… Read more »

At this point I pretty much believe anything that comes out of Ornstein’s mouth when it comes to Arsenal’s transfers. On June 29 he said we wouldn’t be going for Banega even if we didn’t end up with Torreira. Then today tweeted that after Torreira there won’t be any more first team signings. I know this website has been reporting this Banega rumor for a while, but I just don’t think the interest from Arsenal’s viewpoint was as high as reported. Not buying that he is the one turning Arsenal down at this point.