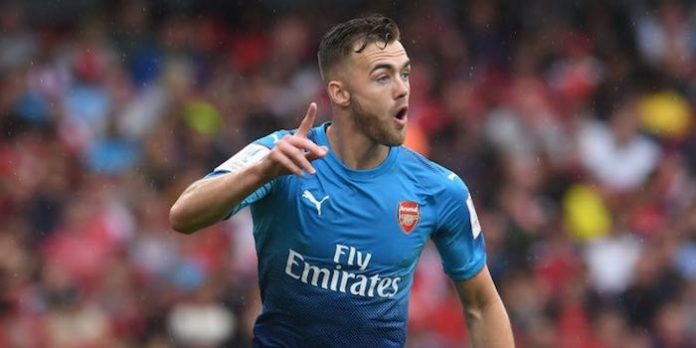 Unai Emery says Calum Chambers is part of his plans for the season ahead and welcomed the fact the England international has signed a new contract extension at the club.

The former Southampton defender has signed his second extension in nine months – his last was in October 2017 – after a promising campaign in which he made 24 appearances for the Gunners.

“I’m delighted Calum has extended his stay with us,” Emery told Arsenal.com.

“He played an important role last season and will be part of my plans this season.”

Delighted to have signed a new deal at @arsenal! I want to give my very best to this great club. Thanks to the new manger for showing faith in me and I’m looking forward to the big season ahead! I promise to repay the fans back for the support they’ve given me! #COYG ??? pic.twitter.com/WxRfjNNUGM

Chambers will battle for a starting berth in the centre of defence with Rob Holding, Konstantinos Mavropanos, new boy Sokratis and, when he returns from injury, Laurent Koscielny. Oh, and Shkodran Mustafi.

He’s also flexible enough to play at right-back and has, in the past, provided back-up to Hector Bellerin.

Trigueros: We should have killed them

Are we not even mentioning Mustafi now?

To be fair, Blogs did say “in the centre of defence”. Mustafi plays behind the opposition striker.

One of them is lying!
Reply to  Jasmeet

Really pleased with this deal. Also, I love the attention Emery appears to be giving to the younger members of the squad. New contracts for Chambers and AMN, whilst also talking them up to the media and letting them know they’re part of the future, can only be a good thing. Especially for their confidence. I fully expect to see them both improve and flourish as a result.

“Chambers will battle for a starting berth in the centre of defence with Rob Holding, Konstantinos Mavropanos, new boy Sokratis and, when he returns from injury, Laurent Koscielny.”
…have we sold Mustafi already?

our CB options are not looking bad at all

Intrigued to see what the plans are at CB this season as I can’t see us keeping all of them. Sokratis will expect to play, as will Mustafi, so it’s important we don’t have three good young CBs struggling for game time and stagnating as a result.

Perhaps a loan for Holding to get a good year of experience like Chambers did. And then a loan for Mavropanos if Koscielny regains fitness.

That’s one way of looking at it! I see inexperience (Chambers, Holding and Mavropanos), defensive risk takers (Mustafi and Sokratis) and uncertainty surrounding Koscienly. Let’s hope Emery can get the best out of them. It has the potential to go both ways!

Jefferson Montero at the Liberty Stadium? The kid ain’t no right-back.

Agreed, I think it’s time we put the idea of chambers as right back to bed once and for all. We have lichtensteiner now and if he and Bellerin are both unavailable the AMN is a better option.

Playing there and starting there are two different things. Everyone and their mum knows he starts in the middle He’s still an experienced option at RB, even if he’ll be third choice at best.

OK, he had a terrible game that day, but is still only 24 and has room to improve

But he can do the job quite nicely in a back 3 setup should Emery decide to use one on occasion.

If Mustafi isn’t sold, then this isn’t a good idea at all. Need another experienced defender in Benatia or a young talent like Pavard/Soyuncu.
Right now it’s all quantity and little quality in the CB department. We go into the season with them and we will be in trouble

It depends if we get Torreira or someone else who can protect the back 4. If so we’ll see them all play better than expected.

Why sell Mustafi? He’s one of the best young CB’s around. We should build around him and Sokratis. Infact we should be buying Benatia and loaning out one of Holding, Mavropanos. If we sell Mustafi we are going backwards again.

I say sign another CB and loan Holding to Fulham. He knows Fulham and he’ll play in the PL. It’s a win-win.

I agree. I’d loan both Holding and/or Mavropanos and get Benatia or Pavard.

No we don’t. We have brought in experience in Sokratis and we should be playing a fairly young defender alongside to learn from him. Just look at the CB pairings all around Europe – one young, one old. Godin + Gimenez, Ramos + Varane, Hummels + Sule, Piqué + Umtiti, T. Silva + Marquinos/Kimpembe. The list goes on.

Thomas B
Reply to  Trez

And Leicester won the league with Huth and Morgan in Central defence. It’s not all about the names and quality, but the way you play and organize is just as important. Let’s atleast give this team and manager a chance before we judge…

Mustafi, Koscienly, Sokratis, Mavropanos and to a certain extent Holding are the same type of defender. The good thing is Chambers seems to be able to compliment them but he isn’t really that good. We needed someone who can read the game and has great positioning like Kos.
I swear most of you haven’t watched Sokratis over the last two seasons because if you have, you’d be praying we don’t have him and Sokratis as our CB pairing long term.

Or maybe, we are all aware that Sokratis has had his moments over the last couple of seasons, but being the ever optimistic Arsenal fans we are we are willing to give him the benefit of the doubt. A change of scenery and new focus night be exactly what he needs to get his consistent form back.

Loving the way the transfer business is being run and waiting for Ramsey to be announced. I see bright season ahead

Reiss Nelson contract extension wouldn’t go amiss either. Currently expires at the end of next season and haven’t heard anything since April when he was supposedly close to signing a new deal.

or just Torreira and Ramsey

We could also be covering our bases with Koscielny, who was walking wounded even before the injury. Hope he makes a full recovery but I guess Emery is taking no chances and needs as many internationals at centre back as possible.

We also have Monreal and Elneny who have experience in a back three and are regular international class players.

We could start the season with Sokratis, Monreal and Chambers. And for league cup Holding, Mavro and Elneny.

Seems fashionable these days for the outside centrebacks to also function in the full back positions. Chambers on the right and Monreal on the left.

Start the season with Sokratis, Monreal and Chambers? Are you mad? Have another look at our first two games of the season and you’ll see why im so abhorrent at that suggestion…

I’d be really surprised to see Elneny at the back again. As much as a loved Wenger his odd obsession with changing positions did no good in the later years

I think there is next to no chance of us playing a back three this season. I suspect Sokratis to be the first CB on the team sheet. Bellerin at RB fully expecting Lichsteiner to push him for a starting position. Monreal and a leaner, fitter Koalasnatch to battle for LB. Who will be the other CB? I can’t see it being Mustafi as him and Sokratis both play on the front foot and it will be risky. There is a good chance it will be chambers however if holding or the other Greek lad make a step up then… Read more »

I think he will partner Sokratis at the start of the season if we don’t buy anyone else. Had a good finish to last season, he’s the oldest of the young lot and I think stylistically probably suits playing next to Sokratis more than Mustafi tbh

and if we have learnt anything in the last few years its the importance of balance between the two central defenders. The contrast in our overall defensive performance when Kos partnered Per, compared to when Kos partnered Vermeulen or even Mustafi last year is stark. I don’t know if Chambers would pair well with the aggressive/pro-active types – and it does seem as if all our other genuine first team options are defenders of that ilk – but, in my very limited opinion, a pairing comprising any of Kos/Mustafi/Papa would always be capable of reproducing some of the basic defensive… Read more »

Mustafi is being unnecessarily maligned. He will come out good at his next club I have no doubt.

Maybe and i have always said there is an instinctive natural defender in there but he is competing with Sokratis for 1 position. Not to play alongside him.

great to see chambers commit long term. hoping he and holding can improve greatly this year, and together with Mavropanos, form the backbone of our defence for years to come! we have 6 CBs for 2 positions. that’s excessive. i have a feeling we’ll be looking to sell Mustafi to balance the books. unfortunately i have lost faith in him. with Kos out until end of the season, that would leave us with a comfortable 4 CBs for 2 positions (3 of them + sokratis, and leicenstein can cover for CB and AMN can slot into RB). let’s hope we… Read more »

One of Holding or Mavropanos best out on loan to develop quicker.