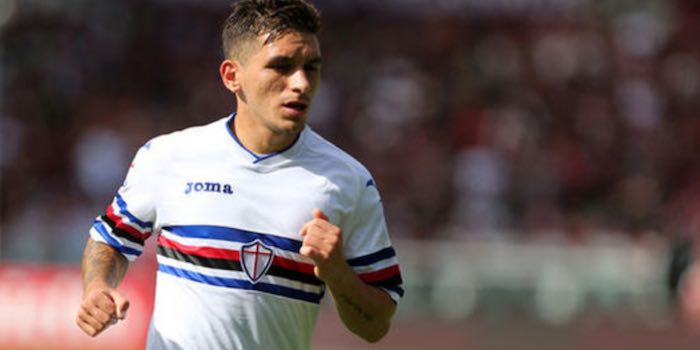 Arsenal have completed the signing of Lucas Torreira from Sampdoria for a fee in the region of €30m.

The midfielder had a release clause of €25m but the Gunners have paid more to spread the payments out over three seasons rather than the full amount up front.

Torreira is a Uruguayan international who has spent the last two seasons with the Genoa club, joining from Pescara in 2015. He arrived in London over the weekend to undergo his medical and sign his contract.

While the Arsenal Twitter account was teasing Gooners about an imminent announcement the Sampdoria social media team just went ahead and pressed the button.

He’s made 74 appearances for the Serie A outfit over 2 seasons, starting 36 of 38 league games last season and 35 the season before.

Primarily a defensively-minded player, known for his high energy and tenacious approach at the base of a three man midfield, the 5’6 22 year old will be asked to do a similar job for Unai Emery’s Arsenal next season as the Spaniard prepares for his first season in North London.

Won’t believe it until I see it on Arsenal.com

No I don’t care if arseblog, he, his father, his former club, his best friend, his first love, his 3rd grade teacher and his hairdresser say it. Arsenal.com

Ahhhh, there it is. I knew I’d have to get the first comment in quickly.

Well you better believe it now buddy. It came up on the Arsenal website just 5 mins after Blogs posted it here. Just shows the speed of Arseblog beating our club to the confirmation.

I did mean to say that ironically. I guess it got lost a bit.

Great news. Exactly who we have need ed for several seasons. Hope he settles in quickly

He’s already above Messi and Ronaldo.

All right, then, I’m convinced.

Woah Maul Person! Blasphemy even in jest is still blasphemy!!

Let’s not get carried away

Got an upvote for your name.

Brilliant signing for the club, these are exciting times. Bring on the new season. #Coyg

you are excited just because we signed torreira

you have commented explaining why this guy is excited

Yasss!! Our very own Pitbull Terrier..

I think you mean, YES

BIG DOG IN THE PLACE TO BE!

Get in you freaking b****** (sorry Torreira I couldn’t help it) of a defensive midfielder. Welcome to the Arsenal Lucas!! Can’t wait for the next season. COYG

He’s a bulldog of a player, looks like he provides that South American aspect, as Wenger would have put it, or Bastardosity as Arseblog would have it.
Really excited about the prospect of having that sort of player in our midfield, especially if he can provide an outlet for the centre backs to reliably play the ball to.

Highly disagree with a defensive midfielder being given the number 11 shirt. It’s not as bad as Gallas 10, but still puts me on edge.

A bit difficult to strip it from the captain though…

or as giving ozil the ten shirt

The 11 might make him look a bit taller though.

Agreed that he’s definitely not a no.11, but the difficulty when giving new players numbers is that players who got there first get the number.
In fact, the only ‘classic’ number that’s not taken is, I believe, no.3 (last held by Kieran Gibbs, and before him Bacary Sagna). Will they give the LB number to Nacho, I wonder? Currently no.18 (originally no.17), he deserves it, I reckon. Or is it being kept for someone else?

Excellent signing considering price vs quality. I’m happy about this one. COYG

Great news now where is dybala?

ronnie
Reply to  The Bishops

In your imagination, I’d say. Considering we have not been linked or even heard any vague rumours of his joining us..

Chamackyungpark
Reply to  The Bishops

He is probably on Holiday somewhere or in pre season training st Juventus.

Petit's Handbag
Reply to  The Bishops

Probably on holiday after the World Cup. My guess is he’s an adrenaline Junkie so check Thorpe Park. Let me know how you get on.

I can’t wait for the season to get started!

WELCOME TO THE ARSENAL

A Different George
Reply to  Laca-Sead

Oh, Jesus Christ, I think you are serious.

I think Torreira is better than Kante. Not much going to get past this Lucas. i like the other Lucas as well, I think he is the same pit. The type that Emery wants to suit his “protagonist ” playing style.

Better than Kante? He’s only 22, mate. Give the kid time.

He is one vicious little Terrier – he will tear the Spuds to bits!!

How about Torreira the Terror?

Oh boy, what a year it’s been for the Arsenal. Meanwhile Chelski don’t even know who their manager is for next season, let alone any new signings ?

And they’re for sale! On sold!! The Russain oligarch have had enough to play with his toy. Or football have become too expensive even for billionaires. Now countries buy clubs. Can’t wait for those countries to run out of petrol. Only clubs that have been building/expending resources will continue on existing. And Arsenal have been a pioneer. COYG the future is RED (fromLondon)

You failed to mention how Arsenal alone is supporting multiple sporting enterprises in the usa.
We’re beyond ‘self-sustaining’ to a land called ‘one-club-sustaining-all-of-Kroenke’s-chain-of-clubs’ .
And don’t forget the ranch too.

Really excited, but a DM no.11 makes me cringe a little!

Cannon and Ball and Arse’n’all

This is an excellent signing, and exactly the type of player we have been missing. He will make life much easier for the rest of the midfield, and will hopefully bring out the best in xhaka..

Hard to believe a player who is only 2 years older than Bellerin and lacked a defensively stable partner until now is undoubtedly “at his best”.

There is a difference between having limitations and being “limited”. Xhaka is a metronome. He will pass the ball 80+ times a game and set the tempo. He has a lovely range of passing. He is not the most mobile and is prone to being run around and ball watching. A terrier like defensive minded partner goes some way to addressing these weaknesses in his game, as will (I’d imagine) a more hands on approach to training and coaching from the new regime. It’s been said he was surprised at the lack of direction he received in training compared to… Read more »

Definitely the signing I’m most excited about this summer. Looked strong and switched on during the World Cup, with a good passing range so not just there to mop up can get attacks going. Plus he’s a young player, can see him learning a lot from working with our attacking midfields too. Hopefully having Spanish speaking players who seem to be big characters/central in the dressing room (Bellerin, Auba etc) will help him settle in quickly, could be a real gem.

Welcome to the Arsenal, Lucas.

I am so happy we are getting signings done nice and early into the window. But, and I hate to question the signings… can we maybe get a winger because if you ask me it very obvious from the last 2 or 3 windows we sold pretty much all of our first team wingers… Walcott, chamberlain etc.

If Walcott is a winger then I.m a walnut. Not sad at all to see the back of him

Did flamini clone Cazorla and coquelin? Have we signed coqzorla?

As a Japanese citizen i can confirm this is indeed Coqzorlizza

No one seems to have mentioned his dead-ball crossing into the box.

Certainly one of the best I’ve seen in a long time. A real threat.

Unai Emery is not a Spaniard. He is a Basque.
Let’s get that right please

Congrats Son. Here’s wishing you all the best at the Arsenal. Welcome on board.

Wait, Son signed for Arsenal? Some Sp*rs are gonna be upset…

Article in The Telegraph: The premier league is dominating the world cup. So True; and who brought it about? Wenger.
Looking forward to our new manager, and Lucas Torreira.

Man alive, a dedicated DM at Arsenal. And he’s going to stay that way (and not get converted into a box to box CM).

What an age we live in.

Just the type of player we’ve needed for years. Look how easy it is to get the players you need when you have the right management.

Why didn’t Gazidis the boss put this management in place before now?

Because he wasn’t the real Boss before now.

I.m happy about this signing! More than the rest

Welcome to the Arsenal! Buzzing with the busy summer we’ve had.

What the fuck is a defensive midfielder?

This is the only signing we’ve made this summer that excites me.

Looks like a real weasel in midfield, nasty piece of work to win us possession.

Lichsteiner is solid but not entirely necessary.

Pastsellbydate I suppose covers Koscielny. Hope one of Holding, Mavropanos or Chanbers steps up this season.

Still think we are short out wide. BIG mistake if we don’t add there.

We lack pace and trickery in the wide areas.

Lucas Torreira our small but very tenacious DM!! hope you’ll be fantastic for us from game 1! No more opening us up easily cuz you’ll get f***** over.

Great signing and really shows continuation of the new strategy going forward with trying to find those players that aren’t on everyone’s radar that have a great deal of growth ahead of them. Torreira has already proven he can play at a very high level in the World Cup and throughout last year and should not have a long adjustment period to the Premier League. Really excited to see what he will bring to the squad.

Can turn with the ball.

Excellent reading of the game and positioning.

Tackling technique reminds me of Arteta. Tenacious and back on his feet like Coq. Not as creative as Santi (unfair ask), but seems to know what he wants to do with the ball as soon as he intercepts it/tackles it away. Great positioning as far as I can tell.

Interesting how he played in the world cup. Most impressed with how he disrupted the areas in front of the box, preventing passes from entering. Seems a very smart player, reads the game well. But just because he’s short doesn’t mean he has anything near Santi’s sublime touch and passing. Until I see more of him that comparison is just hype. But he does have a nice mix of talents and I think he suits us so well.

The biggest transfer story of the day imho.

Great signing and one we would never have got if Wenger was still in charge. We’ve needed a defensive midfielder for over ten years, at last we have one.

Deals done early, no panic shopping at the end, no bad preparation & not ready for the first game of the season anymore.

Wenger should have been binned years ago, thankfully he’s in the past now.