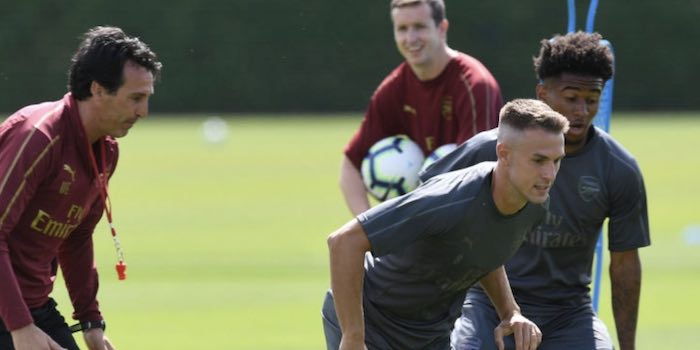 Aaron Ramsey has given his backing to Mesut Ozil after the spotlight was turned on the German following his departure from the national side with accusations of racism and discrimination levelled at the DFB.

The former Real Madrid man returned to the Arsenal fold for the trip to Singapore, and speaking ahead of tomorrow’s encounter with Atletico Madrid, the Welshman was asked about the situation.

“Mes is a vital member of the team here and has been great for us over the years so it’s important for us to stand by him,” he said.

“I’m not sure exactly what’s going on, all we know is that we are right behind him, there’s a place for him here and we appreciate everything he gives to this club.

“We know how important he is for this club, we’re all standing right behind him.

And when it was put to him it might be beneficial to Arsenal, he quipped, “He might get a few more days off!”

The Gunners have been training hard during the pre-season and Ramsey said that although both Unai Emery and Arsene Wenger are both fantastic managers, there were some differences in the preparation.

“This one’s been slightly different,” he said. “Tactically we’ve been working very hard and there’s a lot of information to take on.

As for his own future, which is still very much up in the air, the midfielder confirmed talks were ongoing over a new contract but that no agreement had been found just yet.

Ramsey: Contract talks ongoing but no agreement yet

Sounds like a Captain talking about one of his First Lieutenants to me.

As long as the captain doesn’t decide to jump ship at the 11th hour and decide to leave, I am fine with the ‘Captain Ramsey’ thingy.

Wish he wasn’t leaving it so late in signing another contract. I suppose his agent thinks he’ll be able to hold out for a better deal the longer he leaves things up in the air, but that could work against him as well. I don’t want to lose Ramsey but he isn’t so valuable that he cannot be replaced. His injury woes put him at a slight disadvantage in regards to getting a large payout. No club wants to put out big money for a player who consistently misses a few months of playing time every season due to injuries.… Read more »

Which is why there is non commitment as well.

Does he get the nod over the German? Certainly there is room for both but with one more year left on contract (into 28yrs), he will want to keep options open.

Much may also depend on what/where Ozil sees himself in a season down.

i love that they are working hard tactically so far. Will be much needed for many of the players

It sounds like Wenger and his staff didn’t do much tactical work by the sound of this. It kind of showed on the pitch.

Wenger’s issue has always been he likes to leave things to interpretation. With top end players, that would be less of an issue but bc we have over recent years carried more younger players and not been able to buy fully at top end of market, he cannot cover for these flaws with a laissez faire approach. It wasn’t that he did not do tactics, he manage to beat Conte several times but when it mattered, he was to slow to influence things from the bench. Aside from that, defensively we paid little attention to details. The City side that… Read more »

Yet the most important one demanded by fans for years.
Thanks for the confirmation, Rambo.

What we’ve needed for some time now.

The earlier he sign the better for all parties