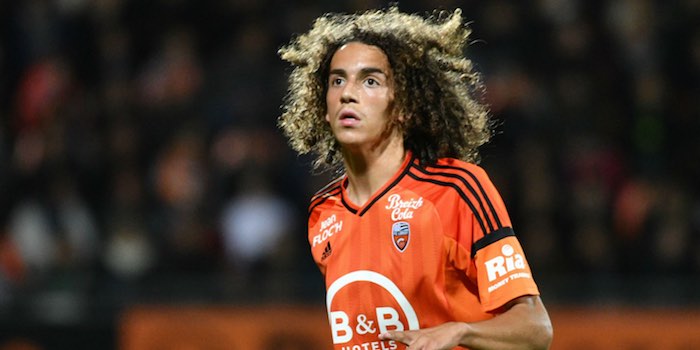 According to Sky Sports, Arsenal are in talks with Lorient over the signing of Matteo Guendouzi.

The 19 year old midfielder made 21 appearance for the Ligue 2 side last season as they finished seventh.

It’s a name that has come out of the blue, and we’re very cautious about ‘Sky Sources’ because they’re often just some random bloke on Twitter who says something and they pick it up, but in does fit the profile of player we’re supposedly after.

Although Lucas Torreira is apparently the final signing for the first team, David Ornstein reported that we were trying to bring in a young player for the future.

Having failed to convince Yacin Adli to sign from PSG, it might well be a case that they’ve targetted Guendouzi next.

So, let’s see what happens. And it’s nice to see Unai Emery really understanding the values of Arsenal by taking a punt on a young French player nobody’s ever heard of.

The great Arsenal January clear-out of 2021

I’m loving it. The last player we bought for Lorient did pretty well. Hope to he does the same if not better.

That’s a proper hair of head!

Great hair – looks like an extra from Mad Max

His Arsenal contract must stipulate that he can never cut his hair.

what arsenal is looking for in young players : tall , central midfielder , plays in france , and a lot of hair

We’re going to start our own version of Led Zeppelin ?

I’m hoping he and elnenny can come good, that would be one hell of a midfield partnership if their lovely hair can continue to progress at this impressive rate.

Have we found the “heir/hair” to Petit?

I’m very impressed with Unai’s understanding of the club’s long standing ambition of always trying to develop relatively young talented players who would grow in the system and understand both the spirit and playing style of the club (consistency and continuity). Well done!

How does he know so much about Arsenal players, the club’s values, weaknesses and other aspects in so little time? Look at the player we signed, not only they play in the exact positions we need, but also the right kind of mentality we lack.

Could it be because he actually has time to study them, because he was actually appointed long before he was declared as the head coach, even before arsene’s resignation?

These are likely Sven Mislintat signings

He doesn’t do french… Wenger’s scout me thinks

Well, he bought Aubameyang and Dembele (for Dortmund) from french clubs ahead of Wenger´s scouts, so you should think he might know a thing or two about football in France

There is no major club that doesn’t have full information on pretty much every promising young player in Europe (and most of South America). There are data on everyone, about everything. You cannot play for a club even as relatively lowly as Lorient without Liverpool, Sampdoria, Valencia, etc. knowing all about you.

I assume Emery knows a bit about Ligue 1, having managed there for two seasons…

This kid is from Ligue 2.

No, Lorient was relegated this year.

Nice. Hope all the youngsters get a chance, be it at Arsenal or elsewhere on loan. On an unrelated issue, is it just me or does everyone really hate Arsenal? Apparently Garry Neville has said criticism of Raheem Sterling is disgusting, and even though he’s scored just 2 goals in over 40 games for England as a forward, it’s his sprints and the spaces he creates for his teammates that matters. This he said barely a week after his disgusting criticisms of Ozil and Xhaka. The chances Ozil created for his teammates didn’t matter then, just as Xhaka’s all round… Read more »

The hate towards Mesut and Granit from Neville and Keown , and a lot of others who should know better, is a disgrace. Neville is a total hypocrite, someone should send him a morror so he can watch his despicable, twisted, hate-filled self in it. Hopefully the team can start the new season well and that will help settle things down, it’s more difficult to be vindictive against winners, but you’re right, there’s an agenda.

I’m always pleased to see Arsenal bring in new players, but with AMN, Willock, Nelson, JRA, Dasilva and ESR, do we need another midfielder?

IMO the only ones of those that can realistically make it at arsenal are AMN and potentially Nelson (all be it he’s a winger not a midfielder).

Fair enough, but don’t you think that Smith Rowe has the potential to make it as well?
As for Nelson, yeah atm he’s a winger but I think he’ll end up playing centrally, a kind of Silva (ManC) role.

I hope not. This Wengerism that the only position of value is Central has to stop. Nelson can be a Hazard, doesn’t have to be central, but can play on the wings, were we need wingers. Wing isn’t just to educate players for central.

It’s amazing isn’t it? We spend years using our wide positions for player development but right now we don’t have single accomplished1 specialist wide player in the squad.

i think emery is going to play 3 man midfield. and when you look at the squad we have obvious squad limitations to play this formation. we only have two quality players to speak of ramsey and xhaka. others ainsley maitland niles , elneny , iwobi are young , not good enough or better used in another position. our squad is such that torreira would slot straight into our first team. and with wilshere and santi leaving and ramsey yet to sign a contract we need atleast another central midfielder. if you noticed throughout the transfer window we were trying… Read more »

You still stuck in wenger era???

I believe he’s a young defensive midfielder who is versatile and play further forward as well. We need some decent u23s and if he’s good enough then he’ll overtake the others. The days of not signing a player because they could block another players progress are over, thank goodness.

Fellaini volume hair without the utterly punchable face and expressive elbows. I approve.

Noticeable absence of poo on this story.

Interesting prospect – a bit like Rabiot or a faster, rangier version of Elneny.

Out of interest, ho do you know this?

I’m not in an a whatsapp group with Gilles Grimandi or anything, was just my personal impression from watching scouting tapes.

Wow, this transfer window could end up being a real douzi.

Ivan: ”i have an idea. When Ch*lsea won the league, who did they have? David Luiz. When City won the league who did they have? Sane. Its all in the hair bros” Sven: ”thats… thats not how this work” Unai: ”what does hair mean?” Ivan: ”Stop being wack, yo! We someone with swag bruh!” Sven: ”well, there is this young french guy who plays for Lorient” Unai: ”hes good yes?” Sven: ”no idea, i only know Bundesliga” Ivan: ”but he does have hair?” Sven: ”uhm.. well yes” Ivan: ”more hair then fellaini.” Sven: ”yeah… but..” Ivan: ”more hair than David… Read more »

Guendouzi is hard to spell. Another modern Arsenal value surely. Mkhitaryan, Aubameyang, Papastothopoulis, Koscielny… How in the world did we get rid of Sczcesny???

A Different George
Reply to  Gunnerlocutor

I think you forgot a zed.

Anonymarse
Reply to  A Different George

shouldn’t that be ‘zee’

A Different George
Reply to  Anonymarse

TeeCee
Reply to  A Different George

He’s not in Rome any more, he’s in Turin.

I can’t see him being bought as a 1st team player this season.
Maybe we’re interested to add him to the U19/21/23 squads.

But is he injury prone?

Never seen him play; France international at various youth levels. But he was apparently suspended by the manager for 10 matches last season for “an incident in the dressing room in November at half-time.”

FrenchMan
Reply to  A Different George

He didn’t want to extend so he was put in the closet.

For a young player, it is difficult to claim a place when your club is a relegable potential in the red zone.

Serpent
Reply to  A Different George

Cech out my lazy arsenal pun

He’s not bad on the drums for the muppets either. Cech has some competition!

This signing doesn’t make brain at all, especially with the amount being mentioned here, we can add little money and get tanguy ndombele, who is already established, young, and a proven ligue 1 star, watched his videos, he’s just like elneny, let’s give zelalem fella a chance.
The problem is we arsenal fans just want a new signing no matter who he is, as a result of wenger starving us of signings over the years

I love how fast this one is getting done. Not a 3 month prolonged speculation. Great work!!