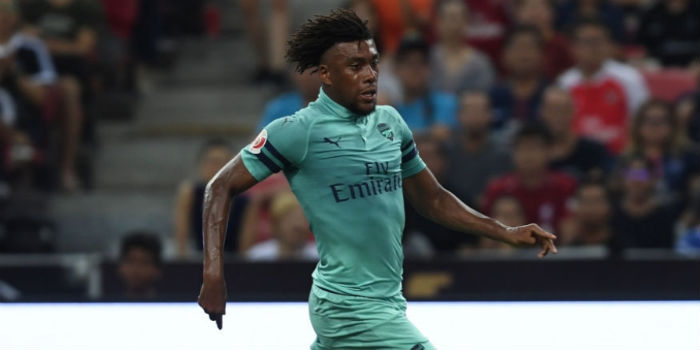 Arsenal have confirmed that Alex Iwobi has signed a new long-term contract at the Emirates.

It’s believed the Nigeria international has signed a deal that ties him to the Gunners until 2022.

The midfielder joined the club’s Hale End Academy when he was still in primary school progressing through the ranks to make his first team debut in a League Cup defeat to Sheffield Wednesday in 2015. He’s since made 98 appearances for the club.

Speaking about the deal, new boss Unai Emery said, “I’m very pleased Alex has signed a new contract with us.

“He is a great example of a player who can succeed from the Academy through hard work and I look forward to working with him and our other talented young players in the squad.”

Iwobi finished last season with 3 goals and 7 assists in all competitions, so let’s hope the security of the deal and the faith shown in him by the club will enable him to improve on that in the upcoming campaign.

Ramsey looks kinda odd,doesn’t he? did he cut his hair?

Lot of potential there, let’s hope he realises it over the next few years.

He is a good player with a great potential and is with us since the age of 6. We should treasure that. He deserves a new contract and I am very happy that he signed one. His weakness is finishing and mainly because of that our fans criticize him and overlook the things he does great. I believe that if he choosed to play for the Three Lions media and especially Arsenal fans would treat him way better.

He wouldn’t make it into their team, had he chosen to play for England.
Let’s not overrate players who still have ways to go..

who let the Sp*rs fan in?

He definitely has room to improve. He has some really good attributes and hopefully Emery will find a way to help him and others that have sort of stalled in their development. We have a group of some very talented youngsters, fingers crossed all the new changes will have a positive impact on them.

When Iwobi and Akpom were vying for a spot in the team on THAT pre-season tour, there was a clear difference: Iwobi was playing for the team, Akpom was just trying to run at the goal and score every time.

It’s a bit ironic, given that in his story on the .com right now, he was influenced by Henry saying you need to be more selfish to stand out. Turns out he got into the team by being less selfish.

Wonderful player with a lot of potential. Homegrown and still very young. I sometimes just don’t understand the sort of berating that he gets. Just needs to put his head down and work his socks off. Good on you young man.

No there’s nothing wrong with his work rate or his overall play. It’s all good. Unfortunately he can’t finish for toffee and in tight matches it can be very frustrating to watch. Hopefully he can improve this one area and not be remembered for it, like Hleb was. I hope so, because i like him as a player.

One break through season is all it would take in my opinion. When all things start coming together the goals would also start coming.

Walcott and Ramsey were equally frustrating at same age in front of goal.

Both had bumper season when they hit 23yrs and reaped goals.

Or maybe he is just a future Welbeck.Can be both really.

I think he can finish just fine, he did so very often at youth level and for Nigeria.. But also check out the quality of the goals he’s scored at arsenal his first goal against Everton where he ran 40yards and arrived 1v1 with their goalkeeper with so much at stake also this was an away match he buried it easy. People tend to forget and so quick to label Player. He can definitely finish his issue is getting into the right positions to finish that’s where he needs work.

He is a player that is not fast enough to play on the wing but also not skilled enough to play in midfield.. plus he has no goalscoring threat to him to play forward. A bit of a jack of all trades that will not see success until he focuses on getting good at at least one of the above.

Lwing yes, pace is lacking but trickery can be useful. In the middle depends how he is employed, roaming from deep, he has the skill on the ball and strength. Its a bit facile to make such sweeping judgments on young players. He has improved over recent half year and is truly one of our more exciting young talents way ahead of Smith Rowe. Not a jack of all trades. Just needs to find the right role to settle and part of that was due to Wenger using him in various gaps he had to fill bc missing capability was… Read more »

Talented player…get unfair stick at times. Is as talented as your Comans, Pulisics, etc. Needs to work on his finishing and consistency. Also should be a bit more confident in himself. Oh – STAY OUT OF SOCIAL MEDIA

‘Stay out of social media’ really? And do what then, Yoga?

Totally agree. Absolutely one of our brighter sparks.

Lozano at PSV another 22yr old we should keep our eye on.

Even arguably Dembele is in the same category, Martial as well. All around 22yrs need to improve but massively talented…just we didn’t pay big money for Dembele so by contrast to fickle people Iwobi looks lesser quality.

Iwobi get’s a lot of bad press but if I’m not mistaken, he scored more goals than Jack last season!

You have to think it’s do or die for him this season really. You can’t live on potential forever. If his end product doesn’t improve then it will be time to move him on. He was just so poor last season, so hopefully the only way is up. Fingers crossed.

santori
Reply to  Kwame Ampadu Down

He was better second half of season. He instigated a lot of our attacks last few games of season We do not possess currently (with Alexis gone) the sort of ability to take on players individually (bar Aubameyang and the emerging Nelson even given a chance this season) And this will be KEY. We suffer transitioning from defense to attack bc most of our players when faced against bodies ahead and passing lanes closed cannot take on players for pace or skill. Thereby they either wait for reinforcements to join, slowing the process down or pass sideways. Iwobi IMO is… Read more »

If he just signed a new contract taking him to 2022/3 then it literally cannot be his do or die season. Plus he’s good enough to be on the bench and come in as a sub at the very least, at his age that cannot be a bad thing at all.

Yes, he can’t live on potential alone and that’s why I’m rooting for him to improve where he needs to but other than that we’ve got a good player in Iwobi.

Much like a lot of the ‘underperformers’ I’d imagine this is the year to prove himself, we dont lose anything from his value this way

I like this. He’s young enough to turn into the player we need him to be. He’s versatile, drives our play forward and works hard. He’s loves the club and he has good technique. If he could work on his ability to beat players and his final ball I think he could replace Miki in the future. The beauty of our squad now is that it has space for youth but doesn’t rely too heavily on them. In defence, midfield and attack we have players with potential who we can play from the bench and in cup competitions but we… Read more »