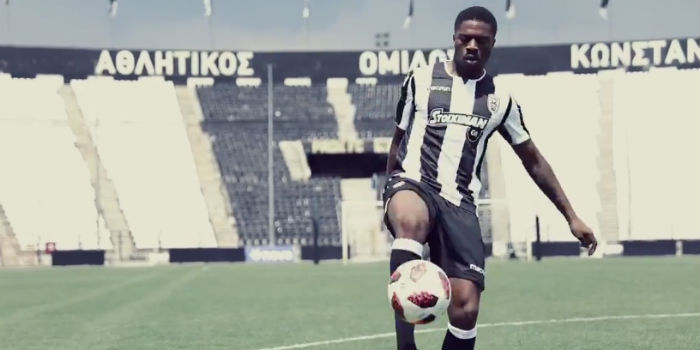 Arsenal have confirmed that Chuba Akpom has completed his move to Greek side PAOK Salonika.

The England under-21 international moves for a fee in the region of £2 million and has signed a 3 year contract.

While the fee may look quite small for a player of considerable promise, reports in the Greek press claim the Gunners have inserted a sell-on clause that could see us net an additional £8 million at some point in the future.

Chuba made his first team debut for the Gunners as a substitute a 3-1 win over Sunderland in September 2013 but only made 11 further appearances in the ensuing five years.

In fairness, he’s spent a lot of time away from the Emirates taking in loan spells at Brentford, Coventry, Nottingham Forest, Hull, Brighton and Belgian side Sint Truiden.

In a statement on Twitter, Akpom wrote: “Wow. Leaving Arsenal after 16 years. From playing in the streets of Newham, I never in my wildest dreams thought I would have the honour of playing for Arsenal.

“I want to say a massive thank you to everyone associated with this amazing club, especially you amazing fans who have always supported me. Excited for this next chapter in my career. Let’s go! Once a Gunner, always a Gunner. Arsenal forever. Thank you.”

PAOK secured safe passage to the Champions League 3rd qualifying round last night with an impressive 3-0 away win against Basel. Chuba could be feasting at Europe’s top table should they get through the next round.

All the best Chuba…or as they say in Greece, καλή τύχη.

If you know the history of that club, then that might be a very subversive, satirical comment. Or not.

From Wikipedia:
Established on 20 April 1926 by Greek Constantinopolitans who fled to Thessaloniki from the city of Constantinople (present-day Istanbul) in the wake of the Greco-Turkish War, they play their home games at Toumba Stadium, with a capacity of 28,701 seats. Their name, along with the club’s emblem, the Byzantine-style double-headed eagle with retracted wings that was adopted three years after the establishment of the club, honours the memory of the people and places (mostly the city of Constantinople) that once belonged to the Byzantine Empire and were invaded and conquered by the Ottoman Empire in 1453

I hope the comment was genuine and not satirical as I’m sure up to 2 million Ottoman Greeks who were either ethnically cleansed or murdered wouldn’t have seen the funny side.

Jenkinson, Campbell and Perez next

“Once a Gunner, always a Gunner. Arsenal forever”.
Good luck on your next adventure. Still think there’s talent there. Some of the loan moves were questionable and maybe we should’ve persisted a bit with him. But good luck…wish you nothing but the best

Maxin In The Shade
Reply to  Trez

We sent him out on loan to clubs that were hardly the right choice.

Definite talent that I would’ve loved to have seen given more of a go.

Best of luck to him. Hope he does well

Well done to him. Not enough British based players have the courage to go abroad and hack it in a different country. Hope he succeeds.

Off topic – but one of my all time favourite football quotes was from Ian Rush after he came back from Liverpool having had a very unhappy time at Juventus. He was interviewed on the subject, thus :-

“No I couldn’t handle Italy. It was like playing in a different country.”

Apparently that’s not a real quote.

The truth is out there … Sunday 6 February 2005 The Observer There are few more notorious comments than the one Ian Rush made on his struggle to adapt to Italian life during his one season at Juventus in 1987-88. ‘I couldn’t settle in Italy,’ the £3.2million man said, ‘it was like living in a foreign country.’ The remark that has tormented the 43-year-old former Liverpool striker ever since is, he says, nonsense. ‘I was set up. It was someone’s idea of fun – probably one of my Liverpool team-mates (Souness) joked that I’d said it and things went from… Read more »

A Different George
Reply to  PodB

If this is true, I must raise my opinion of Graham Souness.

Kunlewoye
Reply to  A Different George

A Different George
Reply to  Kunlewoye

Blogs, how does the official PAOK twitter account say he has signed a 3 year contract, and then you post that he has signed a 4 year deal. You have have access to some information the guys over there don’t! ?

You must* have access… Blogs, consider including a modify option for comments

I wonder if being a permanent signing might make managers more inclined to use him? Is this not a fundamental issue with loans?

Unless they’re exceptional talents that is indeed a problem

I think it certainly makes you more expendable, but these teams – esp not in the Prem – are usually taking on loanees knowing they need the talent. As they’re paying a fee to have the player, it’s in their interest to maximize that investment. For some sides, converting a player from loan to permanent could be good business. For players who are way down the pecking order to the first team, it may be a good plan for them as well.

All the best, Chuba Akpom, and thanks for your contribution to the Arsenal.

There’s talk about the goalkeeping cull but I hope Welbeck and Campbell follow and we promote Eddie. Welbeck particularly staying could “kill” Eddie in the words of one great wise man.

I always thought he did well in pre-season games but in the first team he never got a real chance. I don’t know why, maybe he wasn’t performing on trainings or there is a behavior problem. Also his loanes didn’t go as planned. For me he has/had the talent to become a Premier league striker. Perhaps he still could in the future. Nevertheless good luck to him.

Hope you become a prolific striker in Greece Chuba! You can come back and and once again be a gunner!

Good luck in your career Chuba!

All the best Chuba….A real gunner at heart, and its not all our academy products that are one, so it always makes me sad when we have to let one of ours go. I definitely agree with the earlier comments that there is talent there, I also agree he has been unfortunate in the choices for some of his loan spells….so go on out there lad and make us all proud and i hope that one day you will make it big enough out there to be able to come back and play for the club you love. Adieus

Unrelated; Blogs, I went to contact page at arseblog.com but there’s no info on there. Heads up on Dragomir move to Perugia in Serie B, where Alessandro Nesta is coach. Not bad mentor to have, maybe that was a selling point + regular first teams starts? Pretty sure he had several bigger name suitors? Anyway, I thought I’d leave it on here then.

Unrelated; Blogs, I went to contact page at arseblog.com but there’s no info on there. Heads up on Dragomir move to Perugia in Serie B, where Alessandro Nesta is coach. Not bad mentor to have, maybe that was a selling point + regular first teams starts? Pretty sure he had several bigger name suitors? Anyway, I thought I’d leave it on here then. And good luck to Chuba! Should be good enough to carve out a decent career for himself. And moving abroad (Belgium is a lot closer to home and decent English overall) and out of his comfort zone… Read more »

My first time ever seeing the Arsenal in person was when we beat Villa 5-0 in 2015; what an introduction! Afterwards, while walking along Hornsey Road towards The Tollington, Chuba was stopped at a light in his Range Rover with the window down. I said something along the lines of, “Hey Chuba, great game!” He said in a succinct yet very genuine way, “Yeah, thanks, man.” I’ll always remember that.

Best of luck to Akpom. If anything serves as a reminder to some people not to get over excited about young players in pre-season. Remember as well the Jeff, Zelalem… As Wenger said “everyone thinks he has the prettiest wife” until they see Hudson Odoi and realise other teams have even more talented young players these days. Taking nothing away from Smith Rowe, he has still a long road to travel. As we’ve seen from Iwobi and Bellerin (same people were lauding them as world class first season), initial impressions will be adjusted by reality and the ability to keep… Read more »