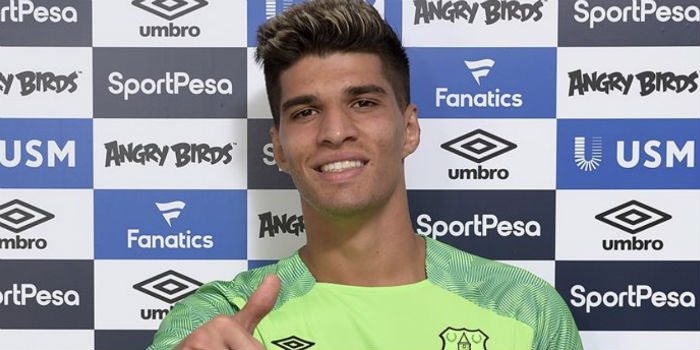 Everton have confirmed the signing of 18-year-old goalkeeper Joao Virginia from Arsenal on a three-year deal.

The Gunners recruited the highly-rated Portuguese from the Benfica academy in 2015 and he’d started to make a mark in London appearing for both the under-18s and under-23s last season. He also played in goal for his country as they won this summer’s under-19 European Championships in Finland.

He’d been expected to compete with Matt Macey and Dejan Iliev for more game time at under-23 level, so news of his departure is something of a shock.

Virginia to Everton move is really, really strange. Lack of goalkeepers at U23 level now for Arsenal, imagine Hein will step up. Virginia such a talented goalkeeper, big blow to lose him.

Speaking about his move to Goodison Park, Virginia told the Everton website: “I am really happy to be at Everton.

“I hope to learn a lot from the goalkeepers here, Jordan Pickford, who had a great season and World Cup and Maarten Stekelenburg, who is very experienced, too. This is a great opportunity for me.”

Virginia is the third youth keeper to leave Arsenal this summer. Hugo Keto and Ryan Huddart were both released and have gone on to sign for Brighton and Boreham Wood respectively.

Alex Crean was also Released. Are we just trying to balance the books now? It’s a bit of a strange one but he’s probably Evertons 3rd choice keeper instead of being 5th or 6th choice with us.

It’s not so strange considering we’re well stocked in that department. No need to hoard players. And sending players on loans doesn’t seem to work for us (we should learn from Chelsea).

It’s obvious the club are trying to raise cash for one or two more signings. It’s crazy we sold this guy. Watched him a few times and he’s looked class. Big blow like Jeorge said.
Crazy how we’ve let quite a few talented players leave over the last few years. Dragomir, Malen, Bennacer, Virginia, etc
I hope this doesn’t come back and bite us like Gnarbry did.
Very disappointed by this.

Malen = needed to play senior football to realise his potential.

also stagnated at arsenal,didn’t perform as expected so made sense for him to move on before it was too late i.e Chuba.

I am still recovering from Gnabry’s departure…

hopefully there is a sell on or buy back clause.

We sold Czszesny last year too. We like to grow talented keepers and sell them.

*and sell them for peanuts.

I honestly believe that was a terrible mistake.

I think he asked to leave knowing he’ll have a better chance at Everton with a portuguese coach. Nothing to relate.

Gnabry made the decision to leave. Wenger tried to persuade him to stay and offered him a new improved contract but he turned it down

Yeah I don’t think sending him to Tony Pulis, the man with the lowest amount of opportunities given to youngsters than any other manager in the PL, with a football style completely at odds with ours was a smart move, let alone keeping him there as Pulis suggested he wasn’t good enough for the PL and made him rot in THEIR reserves helped out case at all

This utterly shocks me. Virginia was the one, he was the keeper destined for first team football. He was the next Chez.

I mean, I don’t blame him. We live in an age where young keepers now play early, the whole “wait till you’re mid 20s for your chance” doesn’t apply anymore (didn’t help Martinez).

He saw your first team list of keepers and reserve keepers and figured he’ll be forced to wait many years when he’s ready pretty much now.

Such a shame. Also thrbsad consqeuence of if you buy buy buy for acute success.

Edit: I forgot Arthur Okonkwo U18

The point is why selling the sure talent ?

You think Ospina is staying ?

Can’t blame Arsenal for buying Leno,But probably should’ve sold macey,let iliev leave,sell ospina and Martinez,All of that made sense,Ospina isn’t happy being 2nd choice,let alone 3rd.iliev decent but was never hyped that much.Martinez 26 and less than 40 senior games.selling best for both parties.Mcey english so Loan made sense.Give virginia the 3rd choice role and he stays 100% and given our options that should’ve been the sensible thing to do.if you are good enough,you are old enough.likes of kylian are winning World cup under 20.why would our prospects wait till they are 20 and even that to be bench options?… Read more »

I agree with all you said, except that Ospina has never seemed unhappy as number 2

Probably,but he agitated every summer..Point is with Leno he is 3rd choice,don’t think he’ll accept that as well.

I wouldn’t put it past him..

To buy the winger, de must sell Welbeck. This way, Nelson will still have chances, Smith Rowe as well.

Reiss isn’t signing because he wants more opportunities and that with Welbeck around.if we sell Welbeck and buy a new winger,he’ll be an upgrade on him which means bigger block to nelson’s first team prospects.You think he’ll sign with a bigger obstacle in place than he already has?
I am not so sure about that….

Do we need to become West Brom so that Nelson can play? He needs to (and can) prove he is a first choice winger in the club.

When you have premium talents maybe you do have to.If the club believes he has what it takes to be a future star,you make compromises.

I know we need to shift some keepers, but surely the ones well into their twenties with low or no experience would be a better option

I guess nobody wants them.

All the best to him. I don’t subscribe to this being a huge loss. Yeah he may have a lot of promise but how many times do we hear that about GKs showing promise only for them to never get a game. In any case, Leno is 26, probably has a minimum of 6 years (assuming he does well and stays on), by then Virginia would have been 24 which is *still* a relatively young age for a keeper. He didn’t want to wait around, fair enough. To be a young keeper and be 1st choice in the prem you… Read more »

I just cant believe how stupid we are, in letting our best young goalkeeper go to everton, its utter madness

A Different George
Reply to  afan

All the best, Joao Virginia, and thanks for your contribution to the Arsenal.

We seem to have lost a lot of talented players at youth level in both our
men’s and women’s teams recently. What’s going on?

No offense but is this a transfermarkt bot?

Tough decisions are made every day at a big club with loads of players.

Thin line between tough decisions and stupid ones.This is dangerously close to the latter.

Really strange on our part. I got the impression he would have been u23 keeper next season ahead of Iliev, we’ve released three of his rivals in Keto, Huddart and Crean, Macey’s out on loan and its highly likely one of Ospina & Martinez will depart now or in Jan. Cech doesn’t have many years left so there’s potentially a real scrap for the no.1 jersey not that far down the line. If the lad’s contract was up and he was looking to get first team football, fair enough on his part. Being no3 behind a 35 year old Stekelenburg… Read more »

Yeap,but as you said he will only be behind StekeB and Pickford,think that’s it really.the former most certainly leaving in a year or two.probably the best 3rd choice role for a prospect in the top 8.

maybe he got caught smoking?

Not sure why everyone is shocked and unhappy about Virginia moving to Everton; Cech, Leno, Martinez, Macey are all in front of him, and we as fans are none too patient when it comes to errors on the pitch and places in the team. We demand a world-class keeper as the #1, and the chances of us raising that player are very slim. Martinez has been ready to be the back-up keeper for at least 2 seasons now, and he’s barely gotten a look. I would have been thrilled to see him back up Cech this season as the #2… Read more »