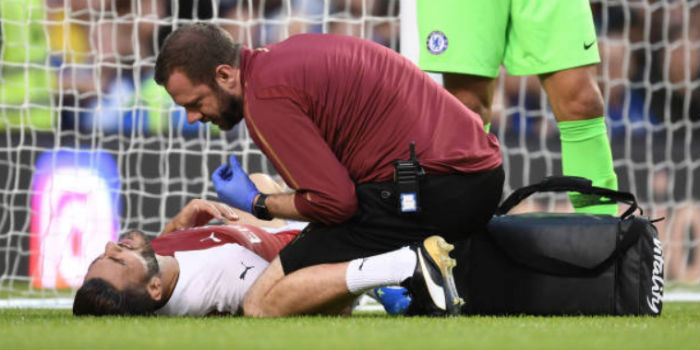 Arsenal have confirmed that Sead Kolasinac will miss the first two months of the season after picking up a knee injury in Wednesday night’s friendly against Chelsea.

The Bosnia international appeared to twist his knee during the second half of the match and immediately signalled to be substituted. While he didn’t appear to be in much pain, he was escorted from the pitch by new physio Chris Morgan.

Kolasinac had been expected to start the season at left-back ahead of Nacho Monreal who only returned to training this week following his post-World Cup holiday.

Unai Emery now needs to decide whether to risk the Spaniard against Manchester City on 12 August or to go with someone like Ainsley Maitland-Niles who played the role at times last season. Monreal could well be given his first pre-season game time in tomorrow’s friendly with Lazio in Stockholm.

Arsenal have also confirmed that Aaron Ramsey will not play against the Italians. The Welshman pulled up with tightness in his right calf in the warm-up on Wednesday and is expected to return to training next week.

That’s a shame. While he looked shaky for lots of last season, there’s definitely a solid player in there if he can tighten up his game. Too bad he’ll have to wait now, but luckily Monreal will give us that consistency. Get better soon Sead!

If he looked shaky for most of last season, there’s nothing to suggest there’s “definitely” a solid player in there. He can improve, for sure, and he probably will. But to the point of becoming a solid player? No. It’s like saying (and I’ve read that too often actually): “There’s a solid player in Welbeck. If only he could improve his balance, shooting and finishing, he would be solid”. And the very reason why he’s not considered solid is because he never improved those traits.

Well, he was in the Bundisliga team of the year for 2016-17. I think that’s a pretty good indicator that there’s a “solid player in there.”

As a wingback with a back 3 behind him to be fair.

He started really well with us, until he was here for a bit and they Arsed it out of him.

I said solid, not world class. It was his first year in England and he did offer a lot going forward. He was found out defensively a lot, but the defense was poor in general last year. At this stage Nacho is definitely a safer option, but Kolasinac has the athleticism and hunger, just needs to get some positional sense. He is a bull going forward though and I think offers more than Monreal in that respect. Better delivery and we’ve seen some great finishes so far (Nacho’s recent goal streak not withstanding)

Word. But I for one think that he has the potential (like Diaby, Eduardo etc) to be truly World Class too. Just needs proper guidance. And from what we know of Mr. Unai, it seems like he could get that too once he recovers from this – hopefully minor – setback.

Think he meant potential Ben. No need to get all negative on a player who scored against Chelsea. 😛

Andre Santos (left back too!) also scored against Chelsea, and got no mercy.

I think we have enough DM cover to allow AMN to back up Monreal.

Not AMN’s best position but he impressed me with how comfortable he looked given his lack of experience in senior football, let alone LB! It’s a chance for him to get game time under his belt, if Monreal isn’t available to play.

Shit. I thought he played better against Chelsea than he had for a long time.

By the time Sead’s fit again, he might well find himself further down the pecking order.
Perhaps Sven can go back to Dortmund and make an inquiry about Jeremy Toljan (who I would quite like at the club, but he’s going to cost a small fortune).

help me understand this correctly – Kolasinac will find himself down the pecking order because you wish that Sven makes an inquiry about Toljan?

When he returns, he’ll be down the pecking order” behind…

can we try Campbell there, Russia tried it with cherychev…. Also modern left backs are attackminded players with speed to recover which I know Joel can
Even if it’s against Lazio the boy as come a long way and ain’t that easy

Also look at Alba and Marcelo

The guy is injured for two months.

An Arsenal player injured just before the start of a new season?

Blogs do another headcount,think you’ll find we are one GK short ?

Bah! This was a big opportunity for him to get a stretch of matches. Very unlucky timing for him, us, and Nacho!

Its the Arsenal tradition. Someone always has to be on an injury.

That’s rather unlucky! Poor Kolasinac. He struggled against PSG but look like he was putting things together again against Chelsea. If anything, we need him to kick on at Lback for us with Monreal getting on. I suppose at least this means old AMN will get another shot at securing a role with the team. He has been nothing short of super for us answering the call of duty. He makes his fair share of mistakes of course but he has great recovery rate which is what’s so good about him., I feel if he impresses again this season at… Read more »

To confirm, we have an old left back, an inconsistent injured back up, a space for a young homegrown left winger and an attacking mentality that lacks direct runners and pace.

Why have we not been linked with Sessegnon?
Why haven’t we made a bid?

I’m guessing he’s got an agreement somewhere with Sp*rs or United but every time I’ve watched him play he looks like a player who would suit us.

Sessegnon is a left winger who is as much of a left back as Bale is. He would also cost £40m+ which is money we don’t have in the short term to spend on potential, however high it might be.

I really like Monreal, certainly one of our most consistent performers, but at 32 with less than 12 months left on his deal, I’d be inclined to sell him if we could get £8mill or so… I’m not convinced by Kolasinac, he’s got real qualities, but also has real shortcomings in equal measures.

Juan Bernat is available at Bayern with less than 12 months on his deal, or if Kroenke wasn’t such a cu*t we could push the boat out for Sessegnon or Gaya

Is Cohen Bramall any good or no?

Where is Cohen Bamali?

Attending a meeting for dyslexics.

The Welshman, who is expected to leave on a free transfer next season because he wants crazy money, pulled up with tightness in his right calf in the warm-up………,

ok people…..how would you say you are feeling as the season approaches a start…..