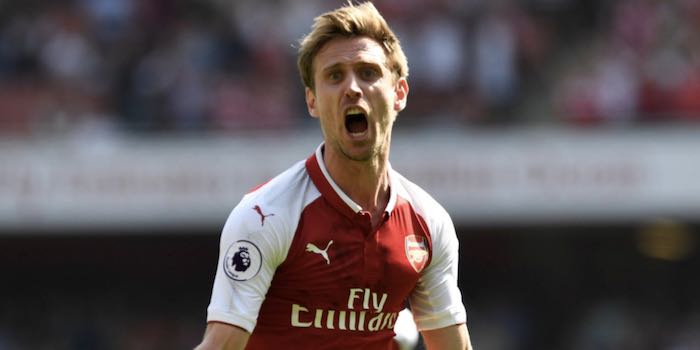 Arsenal are facing the prospect of going into the start of the new season without an established left back available.

Sead Kolasinac was ruled out for 2 months after sustaining a knee injury in Dublin last week, while Nacho Monreal has returned from World Cup duty with a knee problem of his own which, will less serious that his teammate, looks like it will rule out him out of the Man City game at least.

Speaking in Stockholm last night after the 2-0 win over Lazio, new boss Unai Emery provided an update on the Spanish international’s fitness.

“He arrived with no big injuries, but his knee has a little problem and he’s training everyday but not with us,” he said.

“He’s doing work alone with the physical coach, and running, and we think maybe on Tuesday he can start training with the team.

“We don’t want the injuries but it’s one of those things that you can’t help. We have players like Nacho, but he arrived late from the World Cup and also has a small injury.

“It’s difficult for him to arrive for the match against Manchester City.”

And it looks as if Ainsley Maitland-Niles will be asked to reprise the role he played at times last season in Monreal doesn’t make it in time.

“My confidence in all my players is great.”

Off subject (except for injury) but noticed Santi started for Villarreal in their loss at Wolves yesterday.

That is really great news.

When you look at the list of names that are gone from this time last season, I feel like we have had an exorcism. This feels like a whole different club. I think that Stan is a cheap bastard who is unwilling to spend enough to finish the exorcism. Maybe next year the rest of the deadwood will be gone. I think our offense is improved and we did well scoring last season. Our defensive plan is greatly improved even if we haven’t yet addressed it properly in the transfer market yet. Chelsea, manure and spuds haven’t improved at all.… Read more »

Really interested in how our back four shapes up next week. Bellerin & AMN are probably nailed on. Chambers – Holding duo looked slightly better than Sokratis – Mustafi one, still both far from convincing.

Was surprised we didn’t get to see more of 1 experienced CB (Sokratis/Mustafi) + young gun (Chambers/Holding/Dinos) pairing during the pre-season. It was my hot take that’s how Emery wants them to play as Sokratis and Mustafi are very similar.

Poor choices. We still have not sufficiently addressed Cback issues from market despite all the nonsense about better transfer business. Holding still makes plenty of mistakes. Not sure what people are watching. Mustafi- Sokratis you worry about pace. Mavropanos looks OK but hard to tell. Chambers and Holding let Lazio in plenty of times. Had they had better strikers, they could have had 3 goals at least. So not sure what people are thinking. I would have liked to see how Chambers-Mustafi or Chambers-Sokratis worked out not that Chambers is that much quicker either. But Holding and Mavropanos both have… Read more »

Nacho played 0 minutes in the world cup and got an injury…..Kolasinac was ‘the tank’ in Germany but looks more like an empty tank at Arsenal….bad luck strike again?

And despite not playing many minutes in Wcup Welbeck isn’t back.

Well at least AMN covers for us. He is absolute no nonsense, has great recovery rate and some tekkers with the Neymar trap of the ball minus the dive.

Plus he was superb in conjunction with iwobi, the two seem to dove tail well on the attack (maybe a bit less so defensively but they have the chemistry to develop)

On the other flank, have to say Lichsteiner is showing Bellerin how to deliver the ball better.

I don’t half mind the aggression he is showing on our behalf as well.

A Different George
Reply to  santori

The trap was truly remarkable. As for Lichsteiner, I’m not sure he would have made it past the first three minutes in a competitive match with an English referee (“accidental” forearm to the face), but he is experienced at knowing how far he can go.

Danny Rose has been told he can leave S*urs?

The manager could experiment Stephan Lichsteiner at LB maybe? I know AMN will be equal to the task as well. my team for city

Why not Licht on the right and Bellerin on the left?
Instructing the latter to play a conservative role.

I think once everybody is fit Lichsteiner and Nacho will be first choice at LB/RB.

I can’t help thinking we look more dangerous with Laca and Auba on the pitch together. They work well together and if one doesn’t score the other usually does (or both do).

Several of the young players look ready to step in too.

The competition for places is a good thing to see.

I hope there’s nothing in the rumours of Nacho returning to Spain, we really cannot afford to lose our best and most stylish full back. At 32 he still a lot of football left in him and I’d like to see him spend that time at Arsenal.

anyone know whatever happened to Cohen Bramall?

He played left midfield at Hornchurch for our U23’s.
I don’t think he pulled up any trees.

we should probably play a back 3 for this game and use AMN as a LWB. We have tons of CBs and we could probably use extra defenders against Citeh.